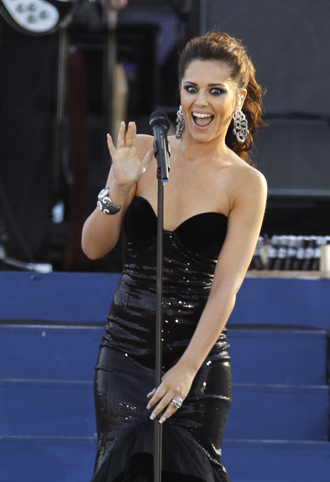 Singer and reality TV judge Cheryl Cole sped to the top of the British charts with her single “Call My Name” in its first week on release, the Official Charts Company said Sunday.

The dance number, written and produced by Scottish DJ Calvin Harris and taken from her new album, “A Million Lights,” sold 152,000 copies, making it the fastest selling single so far of 2012.

The track, written by Take That frontman Gary Barlow and composer Andrew Lloyd Webber, was recorded by Barlow’s Commonwealth Band and given a public performance at a concert outside Buckingham Palace during official jubilee celebrations earlier this month.

Barlow, who received an Order of the British Empire (OBE) award in the queen’s birthday honors, scored a third week at the top of the rankings with an album of patriotic tunes, including “Sing” and the British national anthem “God Save the Queen.”

Also new in the album charts were Scottish singer-songwriter Amy MacDonald at number two with “Life in a Beautiful Light,” and U.S. singer Usher in third place with “Looking 4 Myself.”

Rock group Fleetwood Mac returned to the charts with their new compilation “25 Years - The Chain,” just over a week after early band member Bob Welch was found in an apparent suicide at his home in Nashville.