Kong Hyo-jin and Ryu Seung-bum picked as No. 1 celebrity couple

Kong Hyo-jin and Ryu Seung-bum picked as No. 1 celebrity couple 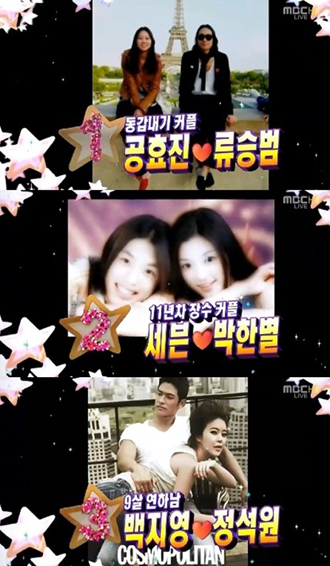 On MBC TV’s “Section TV Entertainment News” which aired on June 17, a ranking of the best-suited celebrity couples was revealed.
Taking the No. 1 spot were actors and lovers Kong Hyo-jin and Ryu Seung-bum.

Despite the fact that they were voted the best couple, earlier on a different show, Kong had said that initially she wasn’t attracted to him and that in the early days of courtship the couple fought “all the time.”
Kong made the audience laugh by saying that when her beau was shooting sex scenes, she always went to watch the shoot.

Other entertainer couples to be ranked were singer Se7en and actor Park Han-byul as well as singer Baek Ji-young and actor Jung suk-won.