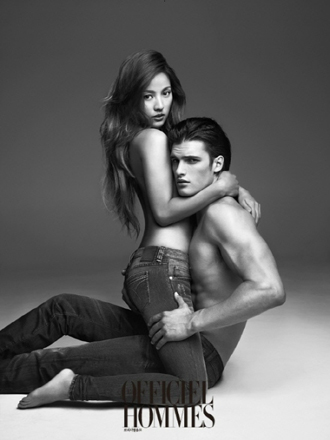 Lee Hyori’s boyfriend Lee Sang-soon may be forgiven if he feels a tad uncomfortable looking at Lee Hyori’s latest pictorial for the July edition of men’s magazine L’Officiel Hommes.

In pictures released on June 19, Lee can be seen in various, seductive “artistic” poses with top male model Matthew Terry.
The two collaborated to promote Calvin Klein jeans and underwear and some of the shots are being declared by netizens as “too hot for those under 19.”

According to a representative from the magazine, the set was a very awkward one indeed as the two celebrities had to dive straight into sexual poses.
“Lee Hyori was the more initiative one, jumping right into it and breaking the ice,” said the representative, who also said in the end it was a great shoot, due to Lee’s efforts.

Lee is one of the nation’s top entertainers and is as comfortable singing on-stage as she is making the public laugh with her witty comments on variety shows.
Meanwhile, Terry is a relatively new face, but nevertheless a rising star, having made his debut earlier this year for Calvin Klein.
By Carla Sunwoo [carlasunwoo@joongang.co.kr]