U-Kiss catches two birds with one stone in Cambodia

U-Kiss catches two birds with one stone in Cambodia 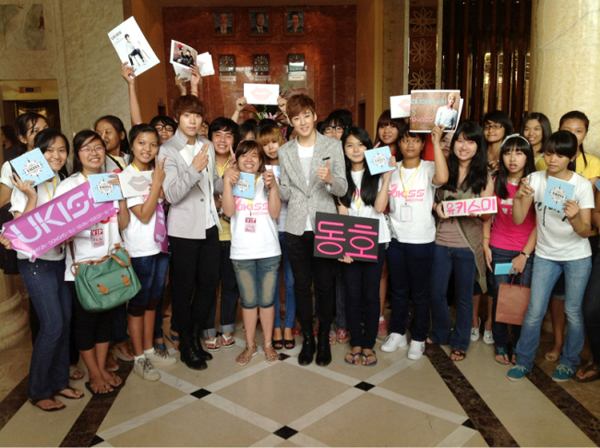 
Boy band U-kiss made a quick visit to Cambodia on June 17. The group was in the nation for two reasons: to visit a school with a charity organization and to meet and greet local fans.

Despite the fact that the Hallyu band’s plane only touched down at Phnom Penh International Airport past midnight, press and fans were lined up outside to catch a glimpse of the band.

The group visited a school in a poverty-stricken area to distribute baseball equipment to the students.
Afterwards, the group held a fan meet on Diamond Island where more than 5,000 audience members were present for a show to mark the nation’s public holiday. Some of the most powerful and affluent Cambodians attended the event as the prime minister’s family members and guests of the state were there.
According to NH Media, the band became the first Hallyu singing group to hold a fan meet in Cambodia.

Currently the band is back home and is gearing up for its Japanese tour to take place from early July.
By Carla Sunwoo [carlasunwoo@joongang.co.kr]