Violence both on, off the pitch worries officials

Violence both on, off the pitch worries officials 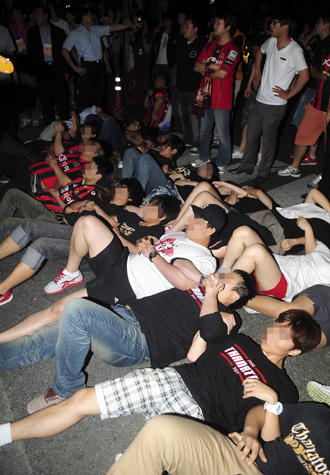 After the Suwon Bluewings dominated the FC Seoul in a 2-0 FA Cup win at Seoul World Cup Stadium on Wednesday night, fans of FC Seoul, many lying on the ground, blocked the bus carrying FC Seoul players from leaving the stadium, demanding manager Choi Yong-soo explain to them the fifth straight loss to Suwon. [NEWSIS]

As Korean football slowly recovers from the match-fixing scandal that rocked the domestic league last year, the emergence of another problem has officials concerned: violence, both on and off the pitch.

The latest incident of football-related violence came in the so-called “Super Match” between rivals FC Seoul and the Suwon Bluewings during and after their Wednesday night FA Cup bout in Seoul.

Suwon won its fifth straight game against the Seoul side 2-0 in a game that saw many reckless slide tackles and body checks. A total of 42 fouls were called and one red card was handed out.

Right before the end of the game, the aggressive play nearly turned into an all-out brawl with players and coaches clearing the benches on both sides. The officials struggled to regain order, but the game was resumed.

In a post-game confrontation, an administrative employee of the Suwon Bluewings punched a marketing official of FC Seoul in the neck three times, sending him to hospital for treatment. Seoul informed police of the incident while Suwon filed a countersuit against the Seoul official for insulting the Suwon employee.

FC Seoul fans were also overcome with anger after yet another loss to their archrival and mounted a physical blockade to keep the Seoul football players from leaving the stadium.

The bus carrying the players was able to leave the scene at around 11 p.m. only after FC Seoul manager Choi Yong-soo promised the fans he would explain within a month the fifth straight loss.

Some observers said such violence is a fact of life in football games across the world, especially in matches featuring metropolitan rivals.

But others said it could be a sign of mounting problems in the K-League. Popularity and enthusiasm are increasing while fans of the sport are becoming rowdier. The massive match-fixing scandal didn’t do much to set a high ethical standard, they note.

Korea Football Association (KFA) officials said they are noticing violence on the pitch increasing at a significant rate. After a K-League match in Incheon on March 24, which ended in Incheon United’s 2-1 victory over the Daejeon Citizen, the fans of the Daejeon club ran onto the pitch and attacked the United mascot. 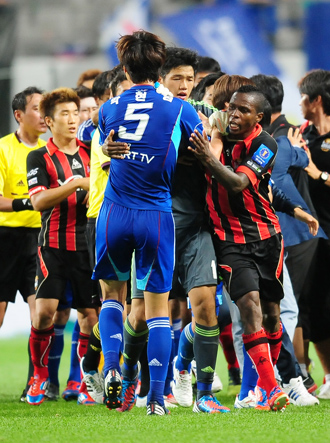 Supporters of Incheon then responded by brawling with Citizen supporters. In response, the Korea Football Association Disciplinary Committee fined the two teams and requested they place an entry ban on violent fans.

The KFA said the lack of measures to prevent fans from taking part in brawls is “worrying.”

“Korean football has yet to understand the potential hazard of collective action by fans, so the host team of a match needs to set up sufficient security to prevent it,” a KFA official said.

The official said the local football community may need a public awareness campaign for the football players and fans that nothing can justify violence in the football stadium.

Hahn June-hea, a KBS football commentator, said violence is still not a serious problem in Korean football. But he did say he was concerned that the rivalry between Seoul and Suwon, dubbed one of the world’s top-10 derbies by FIFA, could be turning into an ugly tradition.

“They could improve football through the rivalry but they also shouldn’t lose respect for each other,” Hahn said.

Only one minute into the game on Wednesday, Suwon’s Dzenan Radoncic was tackled by Seoul’s Kim Jin-kyu and whisked away on a stretcher. In the 27th minute, Suwon’s Lee Yong-rae suffered an injury to his head while vying for the ball with Seoul’s Molina.

A confrontation between Oh Jang-eun of Suwon and Kim Jin-kyu of Seoul triggered the bench-clearing, The referees and officials of the two teams prevented punches from being thrown, but Kim received a red card.

The next match between Seoul and Suwon is Aug. 18.