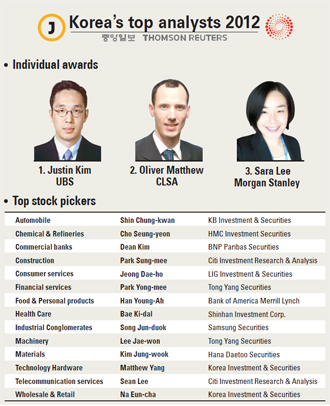 Korea Investment & Securities has the largest number of analysts who accurately predicted share prices of Korean companies, according to the third annual analyst awards sponsored by Thomson Reuters and the JoongAng Ilbo. 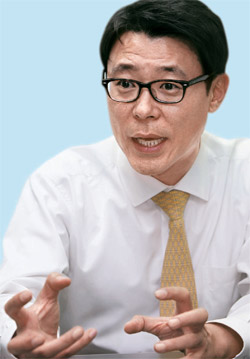 There were 43 award winners from 30 brokerages. Out of the winners, 16 analysts at 11 foreign investment securities firms, or a third of the total, won honors.

The number of awards shrank compared to the previous year because Thomson Reuters and the JoongAng Ilbo excluded analysts that covered fewer than five industries and they didn’t rate top-earnings forecasters as they had for the last two years.

The JoongAng Ilbo and Thomson Reuters conducted evaluations of 952 analysts at 71 local and foreign brokerages that released reports about Korean companies.

StarMine, a subsidiary of Thomson Reuters, measured the performances of analysts based on the results of their buy and sell recommendations.

“In order to maintain the high quality of our awards and to ensure fairness in the calculation of our winners, we have decided not to include either of the earnings accuracy categories in the 2012 analyst awards,” said Mary Morgan, Global Head of Awards for Excellence for Thomson Reuters. “This decision stems from timing changes from when brokerage firms switched from the KGAAP to the IFRS accounting system. Because brokers made this change at different times throughout the year, we are unable to fairly compare performance on estimates across all analysts. We look forward to the return of earnings accuracy awards in 2013.”