Small stores vent fury at ruling in favor of SSMs

Small stores vent fury at ruling in favor of SSMs 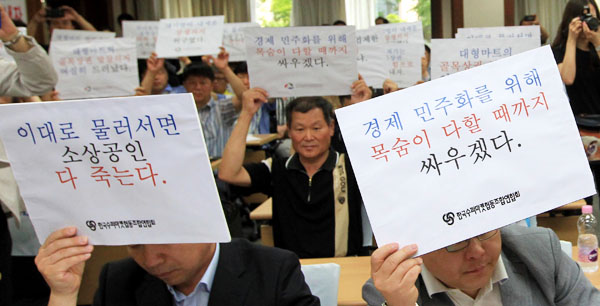 Owners of SMEs that belong to the Korea Federation of Retailers Organization (KFRO) rally against the Seoul Administrative Court’s ruling in favor of five large retailers?yesterday in Yeouido, western Seoul. The court invalidated an earlier ruling that ordered the major stores to close their doors for two days a month, a move that was designed to protect the livelihoods of smaller retailers. [NEWSIS]


Owners of small and family-run businesses gave a press conference with politicians yesterday in protest against a court ruling that has allowed the nation’s five major retailers to avoid recently imposed operating restrictions.

The ruling by the Seoul Administrative Court allows E-Mart, Homeplus, Lotte Mart, GS Retail and Everyday Retail to keep operating on the second and fourth Sundays of each month.

At the meeting at the headquarters of the Federation of Small and Medium Businesses (Kbiz) in Seoul, organizers called for the ruling to be scrapped and a stricter law put in place to regulate mega-retailers run by large conglomerates.

“Small business owners have realized that the conglomerate-led retail stores are no longer interested in coexisting based on a policy of shared growth,” said Kim Kyung-tae, chairman of the Korea Federation of Retailers Organization.

“We will not stand for this any longer. If large retail businesses and local governments do not make any efforts to alter the situation, we will hold a nationwide rally in September,” he added.

Small businesses fear they will be forced to shut down if the regulation that compels big retailers to close their stores for two days a month is relaxed.

The Federation of Korean Distribution (FKD) said the court’s decision to invalidate the limited operating hours of the class of retailers known as super supermarkets (SSMs) has exasperated SME owners, whose livelihoods are threatened by large conglomerates.

Introduced earlier this year, the original ordinance prohibited large retailers from conducting business on two Sundays a month as part of the government’s policy of curbing the expansion of big retailers to protect small and family-run stores.

On the other side of the fence, Representative Kim Young-hwan of the main opposition Democratic United Party called for the ordinance to be made law so the compulsory closures are strictly enforced.

The nation’s three major discount stores - E-Mart, Homeplus and Lotte Mart - shut down 267 of their 368 stores nationwide on the second Sunday of this month, while four major operators of SSMs closed 776 of their 1,084 stores.

Sales of the former declined by a combined 6 percent in May, but their revenue is expected to plunge by double digits this month. E-Mart, the country’s largest discount store chain, marked a 4 percent drop in sales in May, while those of Homeplus and Lotte Mart fell by 6 percent and 2 percent.

Five large mega-retailers, including Lotte Shopping, E-Mart and Homeplus in the Gangdong and Songpa districts of Seoul, filed a petition with the Seoul Administrative Court citing illegalities in the implementation of the ordinances and a violation of the Retail Industry Development Law.

In the ruling, Judge Oh Seok-joon said the ordinances were riddled with procedural problems as they had not been subjected to public hearings and the opinions of the heads of the ward offices had not been taken into account.

However, while the court ruled against the government, it did not say whether the original measure targeting large retail chains ran counter to the constitution.

The five large retailers in the two aforementioned districts opened for business on Sunday after the court overturned the ban. Small and family-run stores at traditional markets opposed the court’s decision, arguing that many are on the verge of going bankrupt as SSMs encroach on their customer bases.
By Kim Jung-yoon [kjy@joongang.co.kr]