Pyongyang vows to up its nuclear deterrence

Pyongyang vows to up its nuclear deterrence 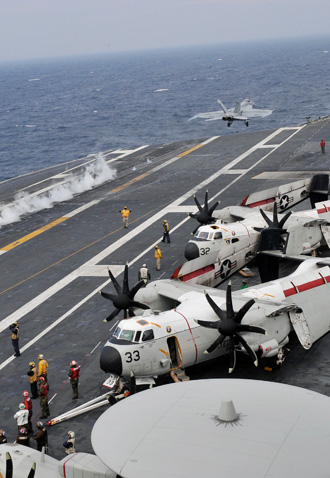 U.S. fighter jet Super Hornet (F/A-18E/F) takes off from the nuclear-powered aircraft carrier SSS George Washington on Sunday in the West Sea. This was part of the three-day combined military exercises by South Korea and the U.S. to mark the 62nd anniversary of the outbreak of the Korean War. [YONHAP]

On the 62th anniversary of the 1950-53 Korean War, Pyongyang once again threatened to continue strengthening its nuclear deterrence, strongly condemning the recent live-fire military exercise between South Korea and the United States.

North Korea’s Foreign Ministry yesterday released a statement that they will continue to develop their nuclear weapons program, criticizing the “hypocrisy” of U.S. Secretary of State Hillary Rodham Clinton.

“As far as the United States outwardly says they don’t have any hostility toward us, but they actually do in action, our nuclear deterrent will continue to be strengthened,” the statement read. “Our war industry has developed to the level that we can endlessly build up our nuclear deterrent by ourselves.

“Recently, U.S. officials frequently mention our human rights issues and economic matters, and one of them is Hillary,” it continued. “It’s unforgivable hypocrisy that the U.S. has continued its hostility to us, which naturally made us build up our national security, and now urges us to make economic recovery our top priority.”

Pyongyang said that the recent Korea-U.S. joint military drill was a grave provocation to them. The exercise in Pocheon, near the border with the North, was aimed at honing the countries’ joint capability to cope with North Korea.

“On [June] 22, the U.S. forces stationed in the South colluded with the traitor group of the Lee Myung-bak administration and staged an unprecedented and large-scale, live-fire joint military drill near the southern region of the Demilitarized Zone, targeting our national flags,” the statement read. “Without any declaration of war, targeting a nation’s flag is a grave military and political provocation, which shows that the military ambition [of the United States] to occupy the entire Korean Peninsula and obliterate our regime hasn’t changed at all since they started the Korean War 62 years prior.”

Prime Minister Kim Hwang-sik said that Pyongyang is “still threatening peace on the Korean Peninsula through a string of military provocations,” such as the torpedoing of the naval ship Cheonan, the shelling of Yeonpyeong Island and the recent launch of the long-range ballistic missile, in his commemoration speech for the fallen soldiers during the Korean War anniversary.

“We shouldn’t forget the fact that the Korean War hasn’t completely finished,” Kim said. “Still, we are in the middle of the cold reality of the division.”

To encourage the government’s efforts to excavate Korean War soldiers’ remains and to repatriate South Koreans POWs in the North, the Saenuri Party launched a task force team yesterday.