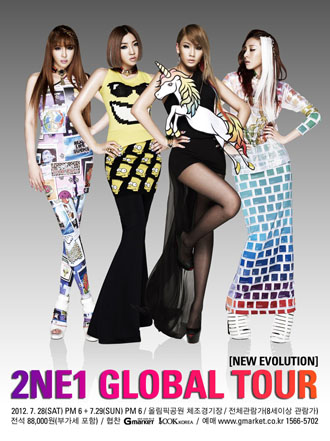 Jeremy Scott took charge of 2NE1’s wardrobe for the “New Evolution” worldwide tour that kicks off on July 28 and 29 at the Olympic Park, eastern Seoul, setting a new stage for dancers’ fashion.

With his foot in worldwide fashion stages such as Paris, London, New York and Los Angeles, Scott’s admirers include Madonna, Rihanna, Lady Gaga, Beyonce and Kanye West. Recently, he was featured in The Face magazine as one of the most influential people in fashion.

There have often been cases of renowned fashion designers exclusively making stage costumes for global pop stars but for a K-pop group, 2NE1 has set a precedent.

Jeremy Scott has revealed that he is a fan of 2NE1 himself, frequently updating his Twitter posts about the group. Because of this, people are looking forward to not only the group’s performance but costumes set as well.

2NE1’s world tour will feature well-known veterans in music, stage performance and fashion such as Travis Payne, of Michael Jackson’s “This Is It,” and Divinity Roxx, the leader of Beyonce’s tour band.
The stage design will be done by Michael Cotton, who has designed big world stages such as the Super Bowl, Olympics and Michael Jackson’s “This Is It.”