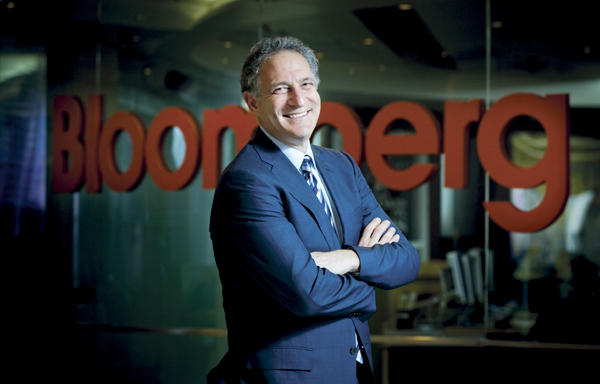 
Despite the euro zone crisis threatening to pull the rug from beneath the global economy as a whole, Bloomberg CEO Daniel Doctoroff said his company is doubling the size of its Korean operation because the government is easing financial regulations on the hedge funds market.

In an exclusive interview with the Korea JoongAng Daily last Wednesday, Doctoroff said Bloomberg has a presence in more than 150 countries and such a step is unprecedented in such difficult times. Korea’s hedge fund industry is in its infancy, however, and that makes it attractive to investors, he said.

“In Korea there is a sense of stability and predictability as well as an inevitability to the intermediate and longer-term growth of this market that encourages people to invest here,” Doctoroff said. “And Bloomberg is a natural beneficiary of that investment.” Doctoroff was in Seoul last week to meet clients, colleagues and government officials.

Prior to joining Bloomberg in 2008, Doctoroff was deputy mayor for economic development and rebuilding for the City of New York under the leadership of Mayor Michael Bloomberg.

He served as a managing partner of private equity investment firm Oak Hill Capital and as a banker at Lehman Brothers after graduating from the University of Chicago Law School.

Q. What are your views on the global and Korea’s hedge fund industry? What challenges are your clients facing and what solutions can Bloomberg provide?

A. In Korea, we have to recognize that the industry is a very new one. We have 18 hedge funds today that have $500 or $600 million in assets under management. Rules are new and people are still trying to understand. In a world of low interest rates, people in Korea, people around the world, are looking harder for places to put their money where they can earn greater yields than otherwise available. Our role is to provide our clients with the tools and information to be able to operate as effectively and efficiently as possible.

When the hedge fund starts operation, the last thing they want to do is spend all their time thinking about systems, legal requirements. They can rely on a provider of those things that enable them to get into business quickly and smartly. We have a package of tools called “H-box” that enables them to get up and running almost instantly.

The Bloomberg Terminal is a package of data, news, communication services and trading connections to various trading venues, to give people much of what they need to do the investing side of business as well.

Although the result of Greece’s election has minimized the risk of “Grexit,” what’s your take on the situation?

We don’t know how the eurozone situation will play out. The election did not ultimately resolve anything. It’s still going to require a broader solution. We all know the problem isn’t just Greece. It’s going to require a more comprehensive solution that’s complicated politically, financially, culturally, it’s complicated from the laws of economics. It will require coordinated action and real leadership. 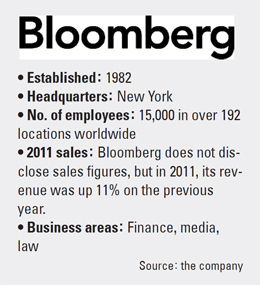 China clearly is a driving force of the world economy. Recent statistics demonstrate its growth is slowing, but to 7.5 percent. We also have to recognize when economies get bigger, it’s hard for them to grow at the same rapid rate.

Growth rates regardless of the euro crisis will slow over time and that’s a natural consequence. When I was in Beijing [last Tuesday], the general sense was that it’s going to be something like a trough, but people were certainly not anticipating anything close to a hard landing.

How is euro zone crisis different from Asian financial crisis in the end of 1990s?

One is sustainability of the social model that has been built up since World War II.

The fact of the euro itself as a common currency makes it completely different and it provides much less latitude for any individual country to act. It requires 27 different nations with very different cultural and financial characteristics to act in concert. The ability to take quick action is very different. I don’t think you can compare the two at all.

How significant is the Korean market for Bloomberg?

We’re opening a new office next month. It’s absolutely beautiful. Of the 192 locations around the world, [Seoul] is where we have the capacity to double in size and we don’t make those investments lightly.

We think opportunity for this market are quite significant. It doesn’t mean it will be smooth, straight line, upward fashion but it has all the dynamics of markets that we want to invest in and grow in. This is an important market for us and one we expect will grow at a faster average than the rest of the world.

We are going to continue to invest and [roll out] more localized products. If you look at Bloomberg as a reflection of how different markets are doing, there is a sense of stability and predictability as well as inevitability to the intermediate and longer-term growth of the Korean market that encourages people to invest here.