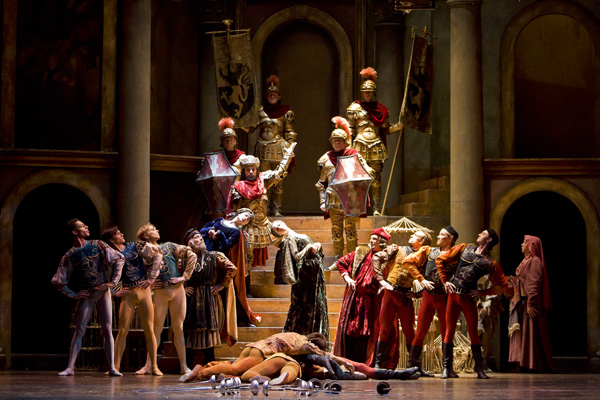 The Universal Ballet will stage Kenneth MacMillan’s “Romeo and Juliet” from July 7 to 14 at the Opera House of the Seoul Arts Center. See THEATER, below. Provided by Bill Cooper

July 6: Since 2004, Croatian crossover pianist Maksim Mrvica has held concerts every year in Korea. Mrvica kicks off his “Maksim Mrvica Korea Tour” July 6 in Seoul, then moves on to Gwangju, Busan, Daejeon and Daegu.

Since his first album “Gestures” in 2000, Mrvica has performed in several genres. His dynamic playing is accompanied by electric sound and a strong beat. His masterpiece, “The Flight of the Bumble Bee,” was acclaimed by critics who said, “His fingers are gifts from God.”

I AM A SINGER

July 6 and 7: MBC’s show “I am a Singer” has been a national sensation since it began. After the nationwide “I am a Singer” concert tour, the cast is back for an encore concert at the Olympic Gymnastics Hall. Seven singers, including Lee Eun-mi and Park Wan-gyu, will appear over the two days, with a different lineup each day.

July 7: It has been three years since the Wonder Girls have performed in Korea, but they are back as part of their “Wonder World Tour 2012” with their new EP “Wonder Party.” The girl group’s hits include “Tell Me,” “Nobody” and “So Hot.”

To July 31: The musical is based on Gregory Maguire’s best-selling novel “Wicked: The Life and Times of the Wicked Witch of the West.” The original Broadway production has been nominated for 11 Tony Awards.

July 7 to 14: The Universal Ballet will be presenting Kenneth MacMillan’s version of “Romeo and Juliet” for the first time in Korea in 30 years. The ballet was first staged in Korea by the Royal Ballet Company in 1983. MacMillan’s version is regarded as most similar to Shakespeare’s story.

July 10 to 28: For the first performance of the musical in Korea, all 3,000 seats were sold out. This production of “Mozart” has a Korean cast, about 500 costumes and an orchestra.

July 7 and 8: An original work by pansori prodigy Lee Ja-ram, “Sacheon-ga” is an adaptation of Bertolt Brecht’s “The Good Person of Szechwan” in the form of pansori. Pansori is a traditional Korean form of narrative music performed by a singer who plays all the characters in the story and is accompanied by a drummer.

Lee is among the most prominent young Korean traditional musicians and has long been interested in mixing modernity with pansori. The performance of “Sacheon-ga” is therefore a combination of modern instruments and the long-established acting and resonance style of pansori.