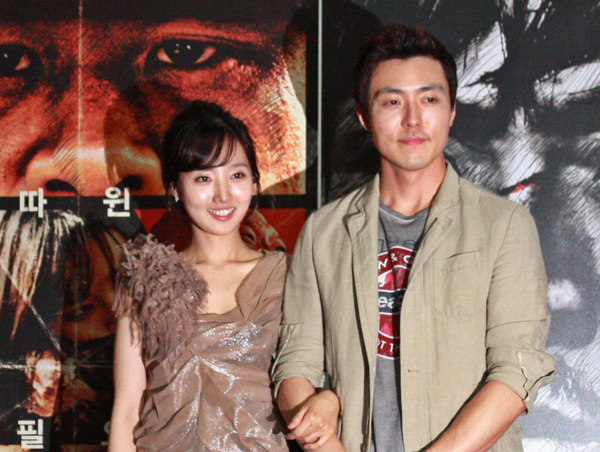 
Ready for a change from those stock cowboy-and-Indian western movies from the United States? Why not go a little farther west, say across the Pacific Ocean to Korea.

“Bloody Fight in Iron-Rock Valley” is set in a uniquely Korean landscape, but retains the familiar story elements of typical western movies.

Having won awards for Best Korean Indie Feature at last year’s Puchon International Film Festival and Best Asian Genre Film at the European Film Festival Federation, the debut feature from writer-director Ji Ha-jean centers on a newly released convict returning to his hometown in Gangwon to avenge his sister.

The director said that he was inspired by leading directors of the genre while making the revenge thriller.

“When I was growing up I loved watching Sergio Leone and Howard Hawks’ westerns and tried to recreate the atmosphere in my own film,” said Ji during a press conference for the movie in Seoul on Tuesday. “I also put care in the background music to create a rather sentimental, serene atmosphere,” he said.

The director said a book by Robert Rodriguez provided valuable guidance on making a western movie on a shoestring budget.

“I read ‘10 Minute Film School’ by Robert Rodriguez and thought it would be possible to make a movie with a low budget if I follow the rules in the book,” he said. 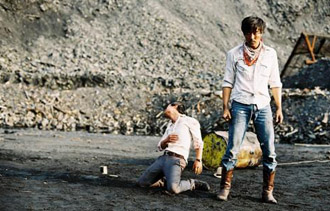 Lee Moo-saeng play the anti-hero Chul-ki in “Bloody Fight in Iron-Rock Valley,” which has plenty of violent scenes. Provided by Indie Story

Still, “Bloody Fight in Iron-Rock Valley” has an edge. The anti-hero wears western boots but rides a motorcycle, not a horse, sweeping into a Buddhist monastery rather than a Dodge City saloon.

About 90 percent of the scenes of the film were filmed in Gangwon, where the industry has boomed rapidly, which reflects many western films’ portrayals of small rural towns being threatened by the spread of the Industrial Revolution in the mid- to late 19th century.

“Gangwon flourished and was bustling with various projects in the past but now the town is mostly abandoned and I thought the location would be perfect for a western movie,” Ji said.

The movie is not a lavish blockbuster, rather it is a spare action film. There are plenty of shootouts and gruesome torture scenes which sometimes took a toll on actors.

“I happened to eat insects when we were filming a scene at a mine,” says actress Choi Ji-eun who plays Tae-yeon.

“I once drank wastewater while acting on the set,” says Lee Moo-saeng, playing the anti-hero Chul-ki.

The film’s central theme of revenge might appear to echo that of other Korean movies, such as “Old Boy” and “Sympathy for Lady Vengeance.” But the director’s experimental take on western movies sets it apart.