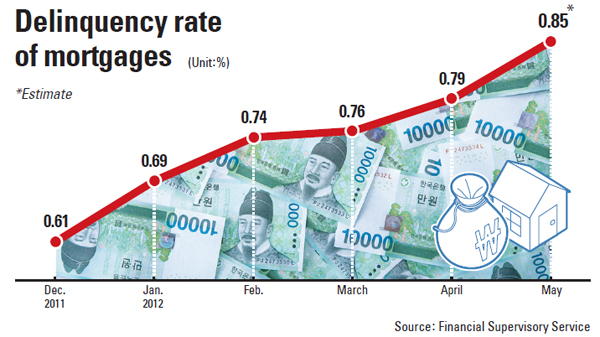 The delinquency rate for mortgages in May climbed 0.06 percentage points to 0.85 percent, the highest level in five years and seven months, the Financial Supervisory Service said yesterday.

Market observers warned that the issue is shaping up to become a ticking time bomb. This is because 77 percent, or 235.4 trillion won ($203.7 billion), of the 306.5 trillion won taken out as mortgages in the first half of this year were to pay off interest, according to Statistics Korea and the FSS.

This means households will face a heavier burden when they start paying back the principal debt in the future, the two bodies said. Mortgage repayments totaling 128 trillion won will be due next year, the FSS said in a press release.

The overall delinquency rate on bank loans to companies and households stood at 1.37 percent in May, up 0.16 percentage points from the previous month, according to the financial regulator.

For borrowers who plan to repay the loan in one lump sum, most banks are willing to extend the maturity of the debt, according to the FSS.

While some agencies have played down the late repayment of mortgages in May, saying the situation is far from critical, private research institutes offer a different outlook.

A report on mortgages by the Business Research Center of KB Financial Group last year found that, when households finish paying off the interest and start digging into the principal, they become “house poor.” By this, it means they spend nearly half (49.1 percent) of their monthly salary on clearing their debt.

“We must be careful not to relax our attention on this matter,” said Kim Jin-sung, a senior researcher at the center.

In order to deactivate the bomb, the FSS said it will introduce a debt rescheduling program - or “pre-workout” - by lowering the interest rate on loans and by allowing borrowers to pay back the principal over a longer term and installments.

Borrowers with repeated short-term delinquencies of less than a month will be its major beneficiaries.

“We will look into whether we should establish a separate organization to oversee the pre-workout program after we have monitored the latest information on mortgages,” said Ko Seung-beom, an official at the Financial Services Commission. “We expect the program will also help improve the financial soundness of banks.”

The FSS cited KB as an exemplary model for its program of parceling the debt into installments.

It said KB transferred 11,000 people’s debt over to the long-term installment plan, and its delinquency rate stood at between 3 and 5 percent. Each of the individuals borrowed 10 million won, on average.