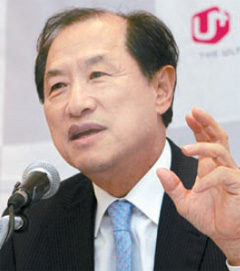 The nation’s third player in the mobile service industry yesterday celebrated the first anniversary of the launch of LTE, the standard for wireless data transfer known as 4G. For the first time among the three carriers, LG U+ succeeded in expanding LTE coverage across the nation late March.

As of last month, it had 2.62 million LTE subscribers, trailing top carrier SK Telecom’s 3.4 million, and the company estimates its subscriber base could exceed five million by the end of the year.

“We intend to roll out a brand new service based on VoLTE this fall that combines PC, smartphone, tablet PC and TV, revolutionizing the nation’s telecom environment,” said Lee Sang-cheol, vice chairman of LG U+, at a press conference Friday at the company’s Sangam building in western Seoul. “You might no longer be able to define what’s TV and what’s PC,” added the outspoken top manager, who did not elaborate further.