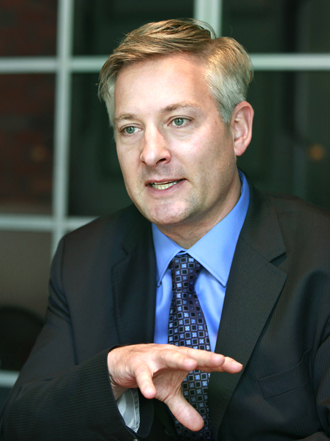 Kevin Skeoch, head of the Dwight International School Seoul which is slated to open in August, speaks about the advantages of the International Baccalaureate program in a coffee shop in Sangam Digital Media City in western Seoul, on June 13. By Park Sang-moon

“There’s a synergy that happens between state, industry and education, and if the three partnerships are working together, you will see a real development of a society, and I think that is where Korea is at,” said Skeoch, also executive director for the Dwight Family of Schools, speaking to the Korea JoongAng Daily in an interview on June 13 at a coffee shop in Sangam Digital Media City in western Seoul where the Seoul campus - currently in its final stages of construction - is located.

The Dwight School is a prestigious private school headquartered in New York and currently has campuses in England, Canada and China, and its Seoul campus slated to open in two months. Just the previous week, Skeoch, who has had more than 20 years of educational experience working with the International Baccalaureate Organization, held a conference to meet with prospective parents who were interested in sending their children to the elite school.

The New York Dwight School was the first U.S. school to offer the IB program to all students from preschoolers to 12th graders and likewise, though there were foreign schools that offered the IB program at the high school level, Dwight International School Seoul will be the first of a string of schools to offer the program from the preschool to high school level in the country.

“Dwight is different because we’re educating future leaders, not test takers,” he said, regarding the advantage of students who have undertaken the IB program. He also said that the education is heavily reliant on the fact that its teachers will be the cream of the crop; they are trained in the IB formula and with an average of nine years of experience. “Anyone can write an exam” but to deal with the unknown and use information to be critical and have skills associated with problem-based knowledge, “are more important to me than writing answers to a test.”

The IB program, founded in 1968 in Switzerland, is divided into three stages: the Primary Years Program for ages 3 to 11, Middle Years Program for ages 11-16 and the Diploma Program, ages 16-19, at the end of which students undergo a cumulative examination which can ensure credits in many universities around the world.

However, despite the popularity and prestige of the IB program abroad, currently, universities here do not accept IB credits from Korean students.

“Some of your best, your best three [universities] will have to admit IB diploma students,” Skeoch said, regarding the roadblock. “There are even discussions happening that will suggest this is coming on now.”

“It’s not the IB that is going to force the change but the Korean students coming in from abroad,” said Skeoch, referring to many Korean families who had moved abroad but want to return to the country.

Universities here need to allow Korean nationals to enter with IB credits, the school head said, and that “In order for Korea to progress, they have to be on par with international corporations and the needs they have for their families. Top companies in any countries regardless of whether it is their top, middle and bottom level will be bringing people from abroad into Korea. Those families’ paramount importance is education.

The Seoul Metropolitan Government invited Dwight to open a campus in Seoul in 2010, and Dwight accepted the offer.

“We are a tried and tested IB world family of schools, which is why the government was interested in us,” he said.

At that time, the Korean government was interested in the International Baccalaureate program, while Dwight was at the time interested in expanding the IB program in Asia, following its Beijing campus.

“Korea serves as a good artery to Asia,” and also its “stable economy” and “progressive attitude toward education,” makes it an “ideal environment for an international school.”

The school-which offers rolling admission-currently has hit its middle-target and has 220 students from 17 nations enrolled for this school year. Its maximum capacity is 540 students.

While admission is open to students of foreign nationality or parents that are foreign passport holders, the school also accepts 20 percent of its students from Korean locals who have been abroad for more than three years.