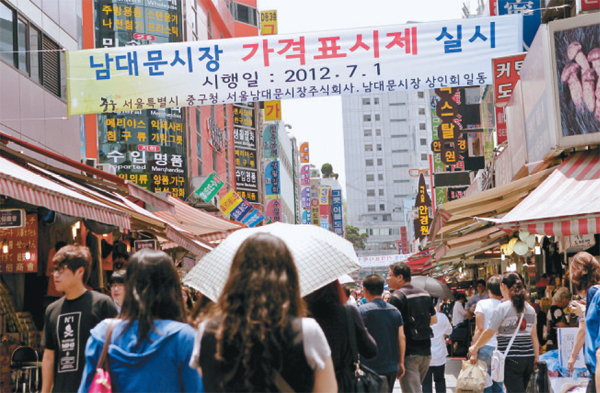 
The Jung District office in central Seoul has decided to enforce a price labeling system for about 6,100 retail stores in Namdaemun Market, a favorite shopping destination for foreigners.

The new policy announced yesterday is intended to reduce overcharging of customers and enhance reliability.

In Namdaemun Market, located near the capital’s busiest shopping district of Myeongdong, about 400,000 people visit every day and half of them are foreign nationals.

Most merchants in Namdaemun were aloof about the new policy that requires 6,100 shops in about 40 shopping districts to mark prices on items by using labels, stamps and tags.

The move came as the local government strained to ramp up the credibility of the market and make it easier for shoppers to buy without having to haggle.

“I wholly agree that the new system is necessary in terms of eradicating a rip-off, but the policy wrongly selected traders as a target,” said a housewares retailer surnamed Yoon.

“The overcharging began among street vendors and call vans picking up tourists. The ward office should have conducted a field investigation of the market at least once before they enact new policy to pinch where the overpricing is dominant,” said Yoon.

Meanwhile, as merchants complain, the new law is in tatters. Only a handful of stores priced their items on the first day of implementation, although the law stipulates a 10 million won ($8,726) fine for violators.

“Even if the price is set on each item, no customers will be willing to pay the amount because bargaining is deeply imbued in traditional markets,” said 51-year-old Hong, a clothing retailer in Namdaemun.

He said it is a wrong to think the traditional market could operate like a department store.

“It is also impossible to attach prices on every single item, and the new rule cannot force the same items from different stores to be priced the same,” Hong said.

There were also concerns that the pricing requirement will not put an end to overpricing. 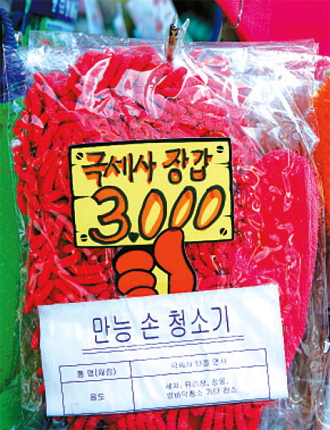 A clearly labeled microfiber cleaning tool was one of the few items tagged yesterday in Namdaemun Market, central Seoul. By Park Jong-geun

Retailers in Namdaemun say tagged prices will be too high because sellers know their customers will continue to bargain.

“It will not fundamentally settle the price rip-off, as retailers can always tag 20,000 won on 10,000 won products. I am very skeptical about how effective the new law will be,” said Hong.

In addition, many say the policy has not been properly promoted and merchants did not know about the system or understand why they should follow the rules.

“As more merchants are unaware of the new regulation, it will only take money from traders by levying fines,” said one merchant.

Meanwhile, there were no inquiries or complaints filed yesterday from customers about overpriced items or rip-offs at the information desk in Namdaemun.