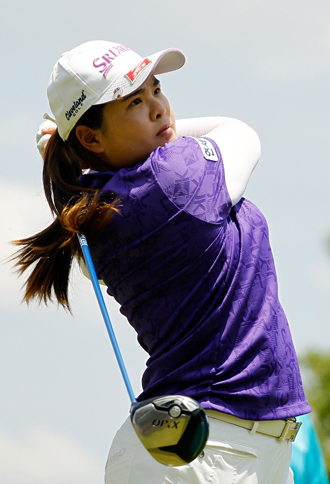 Her next task at hand, the U.S. Women’s Open from tomorrow to Sunday, will be a clear litmus test of how close the golf sensation is to being back to her best form, having won the major four years ago.

The U.S. Open, the most prestigious competition on the Tour, will begin its four-day run tomorrow. Park said she is getting ready for it with confidence.

“It is the most important match of the year, the one that I won once and the one I would like to win most,” Park said yesterday by phone after training at Kohler. “For now, I am all for it.”

Park finished in the top four at the two previous LPGA events including the Arkansas Championship that ended on Sunday. The 23-year-old Korean golfer finished two strokes behind the winner, Ai Miyazato of Japan, falling from second place at the end of the second day.

She came close to a win at the Manulife Financial LPGA Classic the previous week, where she and two other Koreans lost in a playoff to Brittany Lang of the United States.

Park admitted that the pressure to end a four-year win drought got the best of her down the stretch and kept her from maintaining momentum.

After winning the 2008 U.S. Women’s Open at the age of 19, becoming the youngest player to win the event, Park has struggled. Her best finish at a LPGA major since is a seventh-place tie, which she did both at the U.S. LPGA Championship in 2010 and the U.S. British Open last year.

After finishing 50th on the LPGA money list in 2009, Park also tried her talent in Japan and has won four times there since 2010, but a much-awaited second win on the LPGA wouldn’t come easily.

Still, Park said her condition is improving. She said her swing that she corrected last winter now feels almost natural.

“Although I didn’t win [the two previous events], I think I am getting better and that’s positive,” she said.

The goal she set at the beginning of the Tour was to improve, and Park said she will consider any improvement at the U.S. Open from the earlier events a success, although winning is not out of her mind.

A win at the U.S. Open will be an apparent sign of recovery for her and Korean lady golfers, who are collectively referred to as the Korean contingency or the Seoul sisters for their multitude in numbers.

A total of 49 women playing on the LPGA Tour this season are Korean nationals or of Korean descent, according to the Korea LPGA, but for the first 13 events of the season, Korea only won once with Yoo Sun-young’s victory at the Nabisco Championship in April.

Park said despite the lack of a win on the Tour, Korean women are doing well on the LPGA.

“If you look at their performances, it has been good,” she said. “If you would be able to win a tournament, you should have luck too. Who knows? It could be their turn to have some luck soon.”

Park, who immigrated to the United States, won the 2002 U.S. Girls Junior Championship. She made her LPGA debut in 2007 with a third place title on the 2006 Futures Tour Money List and finished fourth that year.