Ko So-young is “cool” with her husband’s kiss scenes

Ko So-young is “cool” with her husband’s kiss scenes 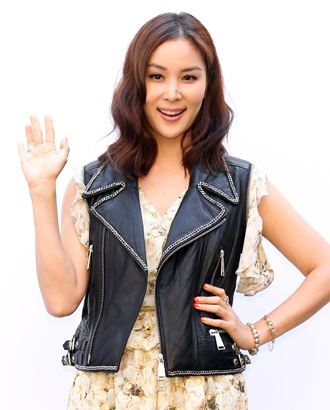 Actress Ko So-young showed her professional side by remaining nonchalant about her husband’s steamy kiss scenes in the current drama “A Gentleman’s Dignity.”
From June 30, the show took a new turn as the main character played by Ko’s husband Jang Dong-gun officially began dating Kim Ha-neul’s character.
There was a passionate kiss scene that stole the hearts of the audience and despite expressing her qualms earlier about Jang taking part in the drama, Ko reportedly told her husband that she enjoyed the episode.

“I enjoyed it,” Ko said to Jang, according to Ilgan Sports.
Meanwhile, at a press conference for the show earlier, it was said that Ko didn’t want Jang to take part in the drama “because it’s written by Kim Eun-sook who always writes stories with a lot of kiss scenes.”
Allegedly, the staff fooled Ko by telling her that there’d be no steamy moments in order to get Jang to sign the contract.
The show starring the Hallyu actor is the most watched weekend program at the moment.

Ko is also set to appear on SBS’s “Healing Camp” on July 9, which will mark her first talk show since marrying Jang in more than two years.
On the highly anticipated show, Ko is set to shed a few tears and talk about how she met and fell for the Hallyu star as well as reveal details about the couple’s high-profile marriage.
By Carla Sunwoo [carlasunwoo@joongnag.co.kr]