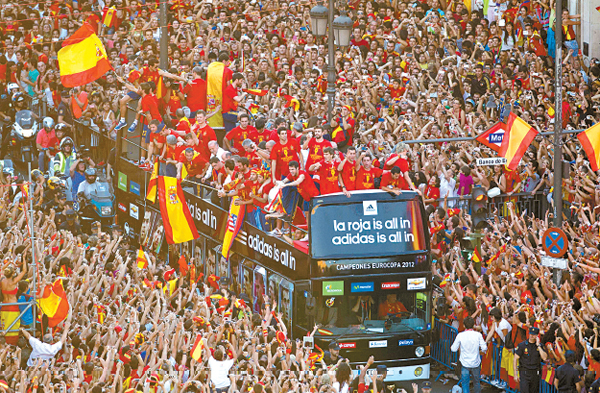 
MADRID - Swathed in the red and yellow colors of Spain, hundreds of thousands packed central Madrid to give a hero’s welcome home Monday to “La Roja,” the national soccer team that erased the economically struggling country’s gloomy mood by winning the Euro 2012 Championship with flair.

With the celebrated team back, it was time to party for a second consecutive night. After a two and a half hour open-air bus ride through the fan-packed streets, squad members took to a stage in Cibeles Plaza against the backdrop of Madrid’s majestic town hall and danced to pop music while spraying each other with sparkling wine.

“It was a merited triumph; we made history and now it’s time to celebrate it,” said mastermind midfielder Xavi Hernandez, adding that Spain hopes to build on the success of the past four years. “Next we’ll go for the Confederations Cup (2013) and then the World Cup in Brazil (2014), but first we want to enjoy this one.”

Earlier, King Juan Carlos and members of the royal family congratulated the players at the Zarzuela Palace outside Madrid within hours of their return from Kiev, where they crushed Italy 4-0 and defended their title Sunday night. The Iberia plane that brought them to the Spanish capital bore the logo “proud of our national team.”

Team captain and goalie Iker Casillas proudly held the tournament cup as he emerged from the plane in Madrid with coach Vicente del Bosque.

In the palace gardens, the king, Prince Felipe, his wife, Princess Letizia, and one of the king’s two daughters, Princess Elena, chatted laughed with the players while two of the monarch’s grandchildren gazed at and touched the cup.

“Congratulations on behalf of the family and the whole of Spain,” the king said. “You have made the entire country happy.”

Prior to reaching Cibeles, a multitude jammed the paths and roads along a near five-kilometer (three-mile) victory route chanting “Champions! Champions! Oe, Oe, Oe!”

Blowing horns, they put up with a baking evening sun to catch a glimpse of their heroes as they paraded by on the bus, escorted by police on horseback and motorbikes. Thousands of more fans cheered on from apartment balconies.

The players danced and sang, raised their trophy and sprayed drinks at the screaming, flag-waving crowds below as the bus crawled along at a snail’s pace.

In Cibeles, organizers sprayed the crowds with water hoses to help them keep cool.

The team’s elegant performance in the Euro 2012 final raised spirits across a country drowning in financial woes and rampant unemployment. It also made them the first team ever to bookend a World Cup championship (2010) with two Euro Cup triumphs (2008, 2012).

“This is historic and I’m here to support the team. They just might be able to do it again so we can win the [2014 World Cup] in Brazil,” said Jose Luis Clemente, 47, a bus inspector clad in the team jersey. “It’s a rare positive point against such a terrible crisis in my country. It gives you some relief.”

Still, he was realistic.

“No football win is going to solve the crisis. That’s work for the economists and the politicians,” he added.

The victory even had some Spaniards offering a tongue-in-cheek suggestion: Why not have the players run the country instead of Spain’s feckless politicians?