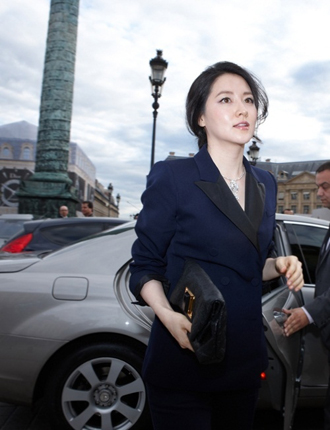 Actress Lee Young-ae attended the opening of a Louis Vuitton shop at Place Vendome in Paris on Tuesday.

Lee was invited as the Asia-Pacific representative to the launch of the famed brand’s jewelry store.

Dressed in a neat suit, the 41-year-old Hallyu actress proved she could hold her own against fashion heavyweights, rubbing shoulders with Hollywood stars like Kirsten Dunst and Sofia Coppola, as well as Princess Charlene of Monaco and members of the Vuitton board of directors Jordi Constans and Yves Carcelle.

In February, Lee made headlines for a different reason: showing her maternal side by releasing pictures of her twins’ first birthday bash.

The low-key event took place at a hotel in Namsan, central Seoul, and was attended by close friends and family of Lee. The one notable celebrity in attendance was actress Jun Ji-hyun.

Lee made her debut in a TV commercial for chocolate in 1990 and rose to fame through various dramas and movies. The period drama “Dae Jang Geum” starring Lee was a huge hit throughout Asia.