Electricity hike still up in air after talks

Electricity hike still up in air after talks 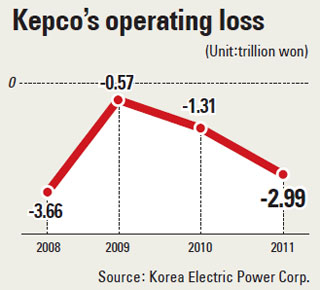 A decision on whether electricity bills will be hiked by around 15 percent remains forthcoming as the Korea Electric Power Corporation (Kepco) board failed to reach an agreement yesterday after four hours of talks.

Negotiations are set to continue on Monday to determine just how much the national power supplier will request the government raise the rates. Members were reviewing a 15 percent increase for residential use and 20 percent for industry.

Kepco’s board initially proposed raising the rate for households by 13.1 percent in April, but this was rejected by the Ministry of Knowledge Economy last month as being too steep.

“As a couple of months have passed since the initial proposal, some officials at Kepco are arguing that the rate needs an even bigger rise to match the company’s deficit this year,” said an official at the ministry. “One of the problems is that there are a multitude of opinions among the board members, with some insisting the rate must match the deficit, and others arguing that they must compromise.”

The Ministry of Knowledge Economy is now considering pushing for a 6 to 7 percent rise, while the Ministry of Strategy and Finance still considers this too high and a threat to the recently stabilized level of inflation, according to a government source.

Consumer prices have been hovering around the 2 percent range for the last four months.

An official at the Ministry of Knowledge Economy said the government is not likely to come to terms with Kepco until it drops its demand below 10 percent.

However, Kepco’s board seems unwilling to bend, especially after its shareholders sued its former chief, Kim Ssang-su, last year for dereliction of duty as he was not seen as pushing hard enough for the hike. They demanded Kim compensate them to the tune of 2.8 trillion won.

The board also sued the government in January, claiming that its regulations curbing power price increases caused financial harm to individual shareholders. The board sought damages of 7.2 trillion won.

The basis of their argument is that electricity prices only cover 87.4 percent of the cost of production.

With the two suits ongoing, Kepco has been keen to position itself as champion of aggressive price increases. It has posted an operating loss since 2008, with the figure stretching to 2.99 trillion won last year.

If the board submits a proposal that is palatable to the relevant government ministries, consumers will feel the impact in about two weeks after the move is green-lighted.