Crisis of confidence for insurers

Crisis of confidence for insurers 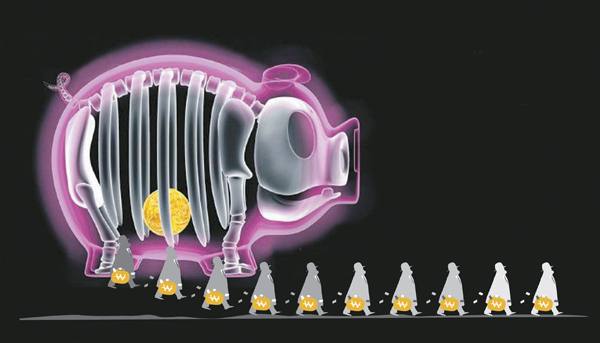 An insurance planner surnamed Ahn is struggling these days as she only managed to attract just half as many new customers in May and June as her monthly average performance.

This was largely due to a consumer report by the Fair Trade Commission (FTC) in April showing that the annual return of pension insurance policies with variable annuities fell significantly short of inflation.

“Customers began reacting very sensitively to the report - to the point where I don’t even dare raise the issue with them,” Ahn said. “Whenever I try to bring the subject up, or explain how the insurance policies work, they just glare at me.”

A company worker surnamed Han terminated his pension insurance policy with variable annuities in May after having invested in it for seven years. He spent a combined 35 million won ($30,720) on the policy, but ended up taking a 10 percent loss to be left with just 31.5 million won.

“I even failed to get back my principal, but I’m relieved that I terminated the policy,” said the 33-year-old.

“The return rate was too low. I even switched my investment options for the policy multiple times from a mixture of bonds and stocks to either just bonds or just stocks, but there were no indications that I would make back my principal, let alone turn a profit.

“I made up my mind to finally quit when the controversy over these pension insurance policies flared up.” 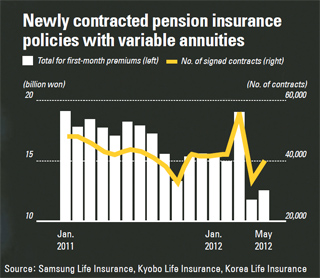 Critics said more customers may ditch their policies in the wake of the Smart Consumer report and that the trend is unlikely to be a flash in the pan.

Industry insiders said they are baffled by the latest development as the size of the market has halved since the report was released.

“My phone started ringing off the hook as customers rushed to end their policies after the report came out in April,” said Jang, another insurance planner.

“When I tried to explain the details of the insurance policies, I often got discouraged as they asked me to tell them how much my company has invested in the policies in total.”

The report is expected to hammer insurers’ sales this year.

According to industry insiders, among the 83 trillion won in total premium income, pension insurance policies with variable annuities make up 12.2 percent, or 10.1 trillion won.

But when calculating the amount of subscription fees for newly signed insurance policies, pension schemes with variable annuities make up 40 percent of insurer’s sales.

“The industry has become shipwrecked on a submerged rock, and that rock is consumers’ lack of trust,” said a marketing executive at a big insurance firm.

“Our top priority is to stop promoting pension insurance policies with variable annuities and restore confidence in our employees by providing more education for them.”

Kim Jae-hyun, a professor of finance and insurance at Sangmyung University, called on insurers to enhance transparency to restore trust.

Meanwhile, the Financial Supervisory Service (FSS) plans to toughen its regulations on these policies in September by disclosing the size of insurers’ total investments and rates of return.

While some industry insiders have raised concern that the regulation may further shrink the market, Jin Tae-guk, an official at the FSS’ insurance department, said the revision should enhance insurers’ credibility in the long run.