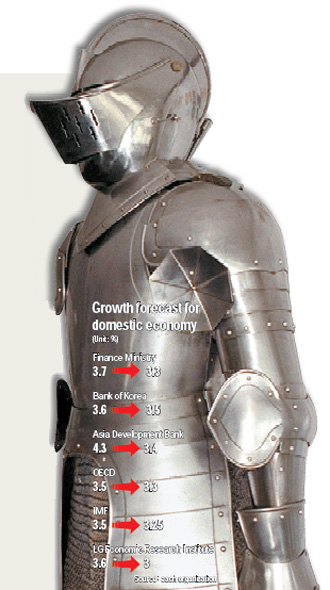 Samsung employees have been punching in up to an hour early since last week as management has gone into emergency mode.

“It’s not obligatory, but we were told that as the head of our department is now coming in early, we’d be well-advised to do the same,” a Samsung employee said. “Previously, we came to work around 8 a.m., but now we’re at our desks at least 30 minutes earlier.”

Media reports claimed earlier that top Samsung executives were advised to be in their offices by 6:30 a.m. after the nation’s leading conglomerate implemented an emergency management system that includes more meetings. This came as the global economic malaise continues to deepen, despite efforts from policy makers around the world to contain it, which has hurt exports.

The target of companies like Samsung Electronics, the conglomerate’s flagship unit, is to preserve sales and profits as the value of the euro continues to slide against the greenback. It sees $1.20 to the euro as a particularly dangerous threshold, and on Friday, it was trading at around $1.23. The last time Samsung put in action such a management system was in late 2008.

Similar moves have been detected in other major local companies, including Hyundai Oil, whose employees have also been coming to work 30 minutes earlier than usual since last month.

The refiner has also been reviewing budget categories by department, hoping to reduce these by up to 20 percent by trimming the fat.

From manufacturers to financial services, local companies are taking preemptive measures, including corporate restructuring and budget cutbacks, to prepare for the deepening impact of the global recession.

Chung Mong-koo, chairman of Hyundai Motor Group, suddenly called in all the heads of the automaker’s overseas operations on June 25. The meeting, which was pushed forward by a month, reportedly served as a platform to evaluate the rapidly changing global auto market and review global production and sales strategies.

The idea was to take preemptive measures in the wake of the slowing global automobile market caused by jitters in the euro zone.

Others are taking even bolder measures.

And from late May, GM Korea began accepting applicants for early retirement. This is just the second time the automaker has done this since Daewoo Motor was bought by GM and relaunched as GM Daewoo. The first time was in 2009, when the global economy was shrinking in the aftermath of the global crisis. Those who retire will get a golden handshake equivalent to two years of their annual salary plus a severance bonus.

GS Caltex has also been encouraging its staff to retire early as its orders drop off, the first time it has done so since the Asian financial crisis of the late 1990s. It plans on cutting 70 people from its sales department alone.

Korean Air, the nation’s flagship carrier, has adopted a similar move for employees aged 40 and over who have been with the company for at least 15 years.

“We’re going ahead with the corporate restructuring, not because the situation is bad for us right now, but rather we see this a preemptive step to prepare for the coming impact of the global recession,” said an employee at one of the companies that has started accepting early retirements.

The severance paychecks are usually a massive financial burden for companies in times of crisis, which is why many are taking the first steps now in anticipation of direr straits down the road.

Others are cutting back on production, or trimming budgets to secure liquidity.

Renault Samsung Motors, which has seen its sales and market share fall recently, is now idling its production lines at weekends. LG Electronics is said to have requested its employees use the cheaper high-speed rail service instead of flights when traveling within the country. Additionally, LG has been asking employees to cut back on unnecessary overseas business trips.

According to a recent study by the Financial Supervisory Service, companies are busy selling their shares in other entities to increase their cash holdings.

In June alone, 18 companies in both the main and secondary markets revealed their plans to sell their shares in other companies. This would see them secure a combined 1.4 trillion won ($1.23 billion) in cash.

One of them, Posco, has already been feeling the pinch due to shrinking global demand. The steelmaker began selling its holdings in numerous investments, including SK Telecom and KB Financial Group.

Tong Yang Group sold its holdings in Tong Yang Resort, while Daewoo International has dumped its shares in its Chinese affiliate Daewoo Cement.

Hite-Jinro sold its building in Seocho-dong, southern Seoul, recently to secure cash, while SK Networks is reviewing selling its buildings and real-estate holdings for the same purpose.

“The companies are already feeling the negative impact of the state of the economy,” said Lee Kyung-sang, an official at the Korea Chamber of Commerce and Industry. “Recently, companies seem to be focusing on surviving the crisis as it develops.”

This comes in stark contrast to the way they responded in 2008, when Korean companies saw the global recession as an opportunity to aggressively increase their investments overseas, which ultimately helped many expand their market shares.

The biggest reason for the change from 2008 is the bleaker outlook for the global economy. There is a growing consensus in the business community that the recent malaise will likely continue for an extended period. In a recent analysis by the Bank of Korea, the majority of listed companies said their profitability has dropped from a year ago and that they are facing severe liquidity crunches.

European and Chinese policy makers announced last week that they would further loosen their key borrowing rates in an attempt to turn the situation around.

Less than one month after it cut its rate, China’s central bank dropped it again to 6 percent, down 0.31 percentage points. The move, which was unexpected, indicated that Beijing does not intend to stand idly by and watch its economic growth fall below 8 percent without trying to stop the rot.

In the first quarter, China’s economy grew 8.1 percent from a year ago. Experts estimate that growth in Q2 will slide to 7.5 percent.

Just half an hour after its announcement, the European Central Bank said it had lowered its benchmark borrowing rate to 0.75 percent. This is the lowest rate since the euro was launched in 2002. The Bank of England on Friday also announced that it will pump 50 billion pounds ($77.5 billion) into the ailing U.K. economy as a stimulus measure.

The moves by policy makers around the made make it clear that most see the recession as grinding for a considerable period without respite. And while their measures went someway to easing investors’ jitters, the market response overall was lukewarm.

On Friday, Christine Lagarde, managing director of the International Monetary Fund, said while visiting Japan that the global outlook has been reduced due to weaker investment, lower production and fewer jobs in advanced economies like the Europe and U.S. as well as in emerging markets.

“The global growth outlook will be somewhat less than we anticipated just three months ago,” Lagarde said. The IMF in April projected that the global economy would grow 3.5 percent this year, a downshift from its prediction of 4 percent made in December.

However, it still appears to be slightly optimistic. The Organization for Economic Cooperation and Development has forecast 3.5 percent and the World Bank 2.5 percent. Prior to Lagarde’s comment, the IMF also lowered its forecast for U.S. growth this year by 0.1 percentage points to 2 percent.

Seoul has also lowered its official projection of the nation’s economic growth this year. The Ministry of Strategy and Finance has revised down its outlook from 3.7 percent to 3.3 percent. The Bank of Korea, which lowered its growth projection from 3.6 percent to 3.5 percent in April, is expected to further lower its outlook during its monetary committee meeting on Thursday.

“We would be defending ourselves well against [the global crisis] if we were to post 3 percent growth this year,” said Kim Choong-soo, BOK governor, at a monthly meeting with corporate heads last month.

He added that the country’s potential GDP growth is slightly below 4 percent. This was taken as hinting that the central bank may lower its estimate of real growth below 3.5 percent.

Global and local institutions are already showing less confidence in the Korean economy this year.

Korea’s susceptibility to external risk is the main reason for this emerging crisis of confidence.

The nation’s dependence on foreign trade has been growing at an exceptional rate, especially since late 2008. At that time, the incumbent Lee Myung-bak administration encouraged companies to increase their outbound shipments while also keeping the Korean currency weak in relation to the greenback and maintaining a loose monetary policy.

These moves helped Korea to recover quickly from the global downturn. Economic growth plummeted to 0.9 percent but posted an exceptional turnaround the following year, when it expanded 6.2 percent.

Over the last few years, Korea’s reliance on foreign trade has grown significantly. It accounted for 69.4 percent of GDP in 2007 and a whopping 97 percent last September, as the domestic market dwindled.

This skewed figure makes the country especially vulnerable to global shocks, hence corporations’ moves to batten down the hatches.

The World Trade Organization in April estimated this year’s cross-broader trade would grow just 3.7 percent. This is a significant drop from 5 percent in 2011 and 13.8 percent in 2010.

Pascal Lamy, director general of the WTO, said in a statement that global trade will further slow this year. “We are not yet out of the woods,” he said.

For Korea, although its exports are still chugging along, the rate of expansion has been decelerating. According to the Ministry of Knowledge Economy, four months in the first half of 2012 saw negative growth in annualized terms. The two exceptions were February, when exports expanded 20 percent on-year, and June, when they edged up 1.3 percent.

The situation was not dramatically different for imports. On-year growth in the first two months soon gave way to four months of shrinkages.

“The impact from the euro crisis in the second half will likely ease, and the economy is expected to slowly recover,” said an analyst at Hana Financial Group. “But the recovery will be limited as exports will probably weaken due to limited growth in emerging markets like China and lingering external uncertainties.”