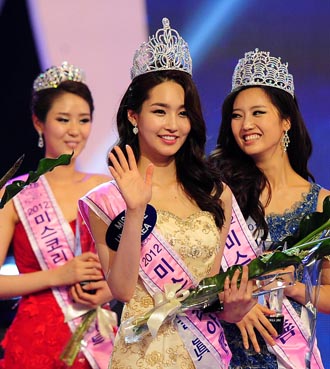 Kim Yu-mi of Seoul beat out 53 competitors on Friday to become Miss Korea 2012.

Kim, a 21-year-old film major at Konkuk University, said she will do her best to represent Korea after winning the top title at the event at Kyung Hee University in Seoul.

The Miss Korea Pageant, marking its 66th anniversary, is the oldest and the most well-known beauty pageant in the country.

The winner goes on to compete in the Miss Universe pageant.

Kim entered the main competition of the national pageant Friday as winner of a regional competition in Seoul.

Kim Sa-ra, the runner-up in the Seoul competition, and Lee Jeong-bin, who won in Gwangju, shared second place in the national pageant.

Sharing third in the national competition were Kim Yu-jin, third in Seoul; Kim Tae-hyeon, second in North Gyeongsang; Kim Na-yeon, the winner in Daegu; and Kim Yeong-ju, the Incheon winner.