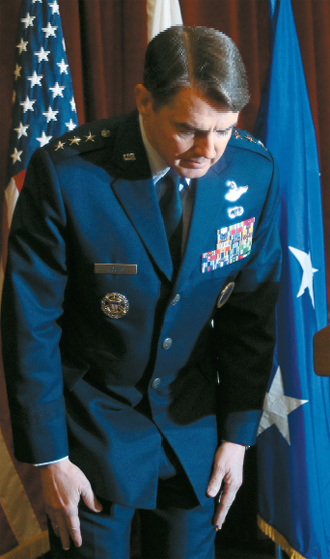 The commander of the United States Forces Korea (USFK) apologized yesterday for the illegal detention of three Korean civilians by U.S. military policemen following a brawl outside Osan Air Base in Pyeongtaek, Gyeonggi.

The Koreans, including a 35-year-old surnamed Yang, were handcuffed by seven U.S. military personnel at around 8 p.m. last Thursday following a scuffle relating to a parking dispute on Rodeo Street near the base. The Americans then tried to haul them onto the base.

“I am very sorry this occurred,” U.S. Army Gen. James Thurman said in a press release. “I want to express my sincere apology to the individuals and community affected by the incident.”

“I have directed a thorough investigation,” he added. “The individuals involved have been suspended from their duties pending the outcome of the investigation.”

According to the Yonhap News Agency, which was the first to report the incident on Friday, Yang, who runs a store on Rodeo Street, had temporarily parked his Daewoo minivan in front of his store to move some luggage. The U.S. officers, who were on duty, then approached him and reminded him that parking is not permitted in the area after sunset. Yang replied in English that he would move the vehicle after he was done eating some chicken. The soldiers insisted, and eventually Yang complied, removing the van then returning to his store. However, the military police followed him and informed him that they had called the Korean police.

Taking offense to this, Yang decided to close his store for the day and subsequently found himself being handcuffed by the officers, according to his police testimony. The U.S. military personnel claimed they were merely trying to prevent him from leaving the scene before the police arrived. A passerby surnamed Shin, 42, tried to intervene, and the U.S. soldiers also handcuffed him.

Four Korean policemen from Songtan Precinct arrived at the site and demanded the U.S. military police release the two men, who apparently ignored their entreaties and tried to move the men to one of the base’s gates. The U.S. soldiers then handcuffed Yang’s younger brother, who was protesting the detention of his relative. As the Korean police repeatedly demanded the civilians be released, the soldiers unshackled them and returned to their base.

The USFK commander said he will “continue to cooperate with the ongoing Korean National Police investigation as we conduct our own investigation.” The USFK “respects the Korean people and will continue to work closely with the community as we look into the facts of this matter,” he added.

On the same day, Lt. Gen. Jan-Marc Jouas, the commander of the 7th Air Force, expressed his apology at a press conference in Pyeongtaek.

“I want to express my regret and offer a sincere apology to the individuals affected by the actions of a small group of airmen who were involved in the unfortunate incident on Thursday outside the Osan gate,” he said. “We will thoroughly evaluate our town patrol procedures and ensure they are in accordance with SOFA [Status of Forces Agreement] and USFK regulations and guidelines.”

“I assure you that we are taking this incident very seriously and are profoundly committed to conducting ourselves within the parameters established by USFK and the SOFA, with complete respect for the laws of the Republic of Korea and the rights of its citizens.”

The Korean police said they have interrogated three of the seven U.S. military police over the matter as Korean law does not allow them to handcuff civilians in such cases. The remaining four are expected to be questioned soon. The precinct said it is looking into the possibility of charging them for making the illegal arrests, which could result in sentences of up to five years in prison or fines of up to 7 million won ($6,150).

Reports claim the U.S. military police initially refused to cooperate with the investigation, prompting the Ministry of Foreign Affairs and Trade to step in, summon Lieutenant General Jouas to its premises in central Seoul, and request that the USFK take action. Seoul is believed to have acted swiftly in a bid to curb anti-U.S. sentiment six months ahead of Korea’s presidential election.

After two Korean middle school girls were run over and killed by an American armored personnel carrier in June 2002, nationwide candlelight vigils developed into mass protests against the presence of U.S. troops in Korea.