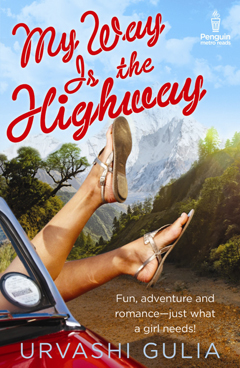 My way is the highway


NEW DELHI - A television reporter walks out of the newsroom after a spat with her boss, setting out on an impulsive road trip that eventually puts her life back on track.

Urvashi Gulia’s debut novel “My Way Is the Highway” is in many ways a memoir, with traits for her characters drawn from the author’s observations of India’s ratings-hungry TV industry.

Manki, the book’s main character, leaves Delhi for the Himalayan mountains hundreds of miles away with only her trusty jeep Iqbal Mastani for company, learning to fish, unwind and fall in love along the way.

Gulia, a former journalist who now works in the nonprofit sector, was inspired by the 2008 murder of Soumya Vishwanathan, a Delhi-based TV journalist. Writing a book was one of the dreams Gulia had shared with her friend and Soumya’s death made her realize she couldn’t put it off.

Gulia spoke about how her book isn’t really “chick lit” and how life isn’t easy for young, single people in India.

Q. You were a journalist yourself. How did this book come about?

A. Way back in 2004, after a series of crazy nights at work, I couldn’t sleep. I wrote a start and an end and announced to my friends that I was going to write a book. I wrote that bit on an office note pad and forgot all about it. The note pad came back to me when I was moving in 2007. I took a sabbatical then and practically changed my career.

In all honesty, I would have probably sat on it longer but I Iost a very dear friend with whom I used to talk about writing a book, maybe making a movie one day and many other things that we would plan to do at some point in life. I realized that I didn’t have all the time in the world to do everything that we dream about. Two weeks after she died, I was at Pune airport, I opened the note pad and put it away. I picked it up a month later and wrote nonstop for two days. That’s how it came about.

Did you really take that trip alone?

I didn’t do it alone. I traveled the route. Every place mentioned in the book is a real place. I picked up the elements of those experiences during camping trips with my friends. I deliberately traveled twice over to get the distances twice to get it right.

Did you have the plot and characters from the outset?

The only things I have changed since the first draft are adding shades of gray to my characters. The initial draft had everything sugary sweet. I had to give Manki that touch - almost every urban woman goes through a phase when she likes more than one guy at a time, then she has to choose and that is not easy. I was initially very careful with the language, too, but then I thought why not use the real words that are used in a television newsroom. My editor’s advice was to be real rather than being nice.

Most of the journalistic instances in the book are drawn from real life, some from mine and some from my friends. Also, there is such a charm in the youngsters about the media world, every young girl and guy wants to be a television journalist, so I thought I should let them get a glimpse of this side as well.

Can this book be called chick lit?

No. I have a big contention with branding books chick lit and lad lit. .?.?. I’d like to say it is an urban contemporary fiction .?.?. I have a moral issue with the chick lit tag. I just feel it is unfair. If 10 years later people say this was one book that talked about how women in Indian cities lived, it is spot on.

How much of Manki is you?

I don’t have the guts that she does. The only similarity is that we are both journalists and daughters of an army. Placing the story in a time span of 2005-9 was easy, too, because I was working in the media, and even later I still had friends. So the research was not very difficult. Manki and I talk and think at the same pace. She thinks so much, does too much in a day. I don’t have Iqbal, the jeep. Also, I wish I could take a lone trip into the hills. All the traits I have built in are the amplified traits of journalists in this country.

How tough or easy is life for a single woman in Indian cities?

The cities don’t make it easy for you. It is a personality issue. I mean you can live as bold a life as you want in Delhi or Bombay, Bangalore or Kolkata. .?.. Apart from that it is your decision, you decide this is what I want and these are the precautions I will take to stay safe. There are tiny peripheries in all these towns where you may be safe. You need your allies. I feel it is a huge celestial conspiracy against single women in India: From absolute strangers, neighbors, friends to eventually your own family members start asking questions. Why are you single? And if you are seeing someone, then why is that person coming over to your house? Same goes for men too. No one wants to give a house to a bachelor.”