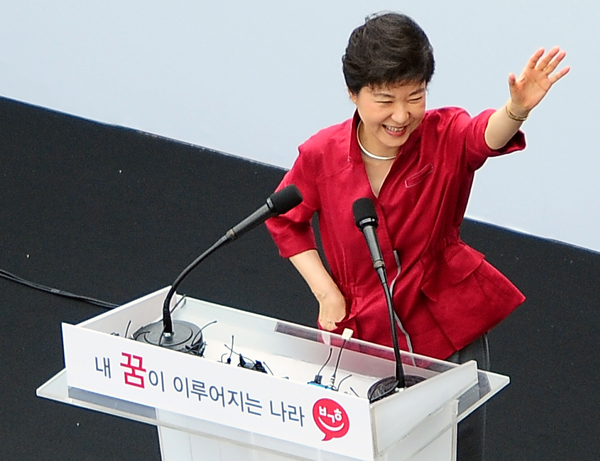 “I stand here today with the determination to sacrifice my everything to make Korea a happy country, where every single one of your dreams will come true,” Park said in front of hundreds of supporters gathered at Times Square in Yeongdeungpo, a middle-class commercial district.

In her speech, Park expressed her vision of shifting the basis of state affairs from the growth of the country to the lives of every individual.

“In the past, the country’s development led to the people’s happiness,” she said. “But today, the link has been broken.

“My three key tasks [to restore this link] will be realizing economic democratization, creating jobs and establishing a Korean-style welfare system.”

Regarding inter-Korean affairs, Park said she will “end the vicious cycle of distrust, confrontation and uncertainty between the two Koreas and take the first step to build a new Korean Peninsula of trust and peace.”

This will be the 60-year-old politician’s second attempt to become president. In 2007, Park was narrowly defeated by President Lee Myung-bak in the primary of the Grand National Party, the predecessor of the Saenuri Party.

The ruling party will hold its primary throughout the next two months and announce its presidential candidate on Aug. 20. Park is widely expected to win the party’s nomination.

Park opened her speech by talking about the tragic death of her mother and Korea’s beloved first lady, Yuk Young-soo.

“After my mother’s assassination, I was able to endure the unbearable pains and hardships because of my responsibility and duty to fill her vacancy,” Park said. “And I was able to do it because the people gave me the power.”

The presidential frontrunner did not mention her late father nor other controversial issues such as the May 16 military coup through which her father rose to power in 1961.

On the vision of economic democratization, Park promised to promote legitimate business activities while abolishing unnecessary regulations to revive the economy.

“I will make a government that can enforce laws decisively to make companies with larger influences fulfill their social responsibilities,” she said.

She also promised to create quality jobs and build a welfare system that will accommodate the public’s needs based on their age groups.

“I will try to achieve a grand compromise among the people on the levels of welfare benefits and tax payments,” she said.

Her aide later explained that she was stressing the need for the public to reach a consensus on the acceptable amount of tax burdens for sustainable welfare programs.

In her speech, Park also stressed the importance of investing in education to foster national competitiveness.

She promoted her image of “keeping a promise at all costs,” reiterating her determination to follow through with the pledges if she wins the presidency.

Following the public speech, Park held a press conference and answered reporters’ questions. The concept of economic democratization was further discussed before the media, and Park showed willingness to reform the controversial ownership structures of Korea’s conglomerates.

Calling the long-standing practice of circular shareholding structures “irrational,” Park said it is necessary to regulate any new attempts, while the companies should make voluntary decisions to reform existing practices.

The controversial circular ownership structures of many conglomerates in Korea have long been criticized because they allow only a few people, mostly family members of the conglomerate owners, to control the entire business groups with only small stakes.

Park also hinted at giving up the powerful authority of the presidential pardon if she wins the election.

“When a sentence was not carried out and pardoned after a while, it badly affects the rule of law,” Park said. “The general public thinks it is unfair when rich people go to jail and are soon released. This is not acceptable for Korea to become an advanced country.”

While her 2007 presidential campaign was themed after making Korea an advanced country in five years by upholding liberal democracy and the market economy while cutting taxes, easing regulations and enforcing law and order, Park’s 2012 campaign will focus more on improving the lives of individuals.

The main opposition Democratic United Party yesterday compared her presidential ambition to an attempt to extend her father’s dictatorship.