Before baton is passed, a renewed push to privatize

Before baton is passed, a renewed push to privatize 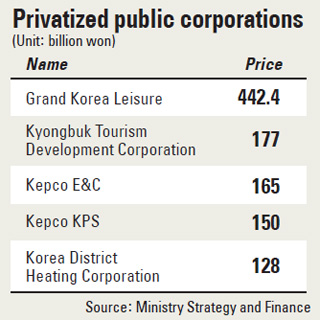 Five months before the next administration is due to take power, the government is making last-ditch efforts to privatize public corporations.

KORCM, which owns about 45 billion won ($39 million) of assets, was established in 1993. The government set up four public entities to supervise the nation’s construction projects after the collapse of Paldang Bridge in Gyeonggi in 1991.

The government included the company in its list of 17 to be sold off based on a judgment that it wouldn’t play a large role in the construction industry as there are already 576 private supervisory companies in the market.

The company first went on sale last year, when four failed bids were held. “The recession in the local construction market probably affected the sale,” said Kim Yong-ho at the ministry.

Kim hinted that there was a higher chance of the KORCM deal being successfully concluded this time as the ministry has commissioned it to Kamco.

The ministry’s move is part of four-year-long government plans to advance public institutions by selling them off or streamlining their functions to improve efficiency.

Since 2008, a total of nine public corporations have been sold to the private sector. The government earned an estimated 1.2 trillion won from the sales, the official said.

The government said in late June that it will continue with the advancement plan until the end of the year. There are 47 tasks that it wants to complete before President Lee Myung-bak leaves his post. Twenty are proceeding smoothly, including the privatization of the Korea Housing Guarantee Corporation, Korea Enterprise Data and Incheon Total Energy Company.

However, not all of its plans are being warmly received. Its plans to sell off a 41 percent stake in Incheon International Airport, adjust the functions the of Korea Electrical Safety Corporation and invite private competitors to bid for Korea Gas Corporation have all faced public criticism.

“The government is pushing for the plans without providing concrete proof of their legitimacy, blindly saying they will help improve efficiency in the way public institutions are managed,” said an official at the Citizen’s Coalition for Economic Justice.