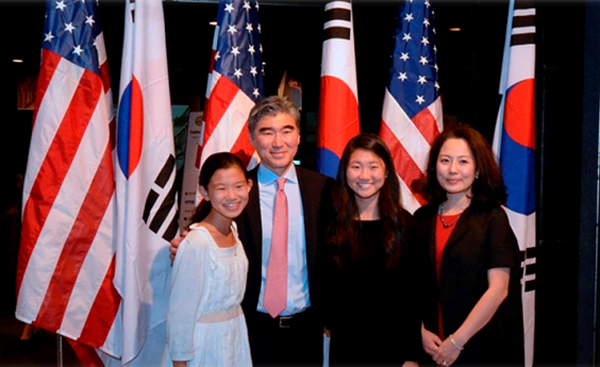 Sung Kim, the U.S. ambassador to Korea, is reunited with his family after eight months of living apart. Provided by the U.S. Embassy


Eight months after Sung Kim assumed his post as United States ambassador to Seoul, he has reunited with his family.

The U.S. ambassador wrote in a blog post on July 9, “I am so delighted that my family has finally been able to join me here in Seoul.”

“Being a ‘gireogi’ [goose] father was much tougher than I had imagined, so I am extremely happy that experience has come to an end.”

Gireogi father refers to Korean dads who work to earn money at home while their wives and children live overseas, usually for education.

While Kim began his post in Seoul in November, his wife remained in the United States while his two daughters attended middle and high school.

But Ambassador Kim is a goose father no more. The three most important ladies in the U.S. ambassador’s life have joined him in Seoul, along with their Havanese dog Tobi.

“My wife grew up in Seoul and has strong ties here. She is really looking forward to catching up with her parents, family and friends,” Kim wrote on his blog.

His wife is a Ewha Womans University graduate. His older daughter will start a summer internship at an online publication, while his younger daughter will take up ballet and tennis.