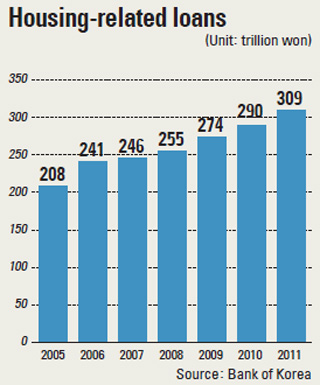 Government figures indicating that Korean society is seeing a fairer distribution of income may be misleading, according to local academics.

The national statistical office recently said that income inequality is showing signs of diminishing, but experts point out that these figures have been distorted by growing household debt.

“We shouldn’t just blindly believe the statistics,” said Yoo Kyung-won, a professor at Sangmyung University. “The Gini index for income has improved, but mostly because people are relying more on loans than ever before.”

According to Statistics Korea, the country’s Gini coefficient for disposable income fell from 0.312 in 2007 to 0.311 last year. A lower coefficient indicates greater distribution - or in this case, more equality - and a measure of zero represents perfect equality.

Armed with the statistics, the government has been insisting that the income gap has not widened since 2008.

Over the same period, the statistics bureau’s way of calculating inequality by gauging the assets households own showed a remarkable improvement from 0.662 to 0.632.

However, based on Yoo’s calculation, the index for household debts jumped from 0.710 to 0.801 over the same four years.

“The two different index figures suggest that inequality in ownership of assets seemingly decreased because Koreans tend to buy houses or real estate; but to do that, they usually take out more loans,” Yoo said.

According to a household survey by the Bank of Korea, 55.7 percent of respondents who took out bank loans last year did so in order to buy property. And 89.6 percent of those surveyed said they are struggling to repay the loans.

Household debt is expected to hit 1,000 trillion won ($875.3 billion) soon, according to data compiled by the central bank. Some 10 percent of this must be repaid by the end of the year.

“Combined with the recession in the housing market, the country is seeing a growing number of so-called ‘house poor,’ a trend that poses a threat to the health of the economy,” the professor said. The term “house poor” refers to homeowners who find it hard to make ends meet because of mounting debts.

“Making sure people can repay their loans is a key task in order to eradicate the household debt problem,” said Lee Joon-hyup, a researcher at Hyundai Economic Research Institute.