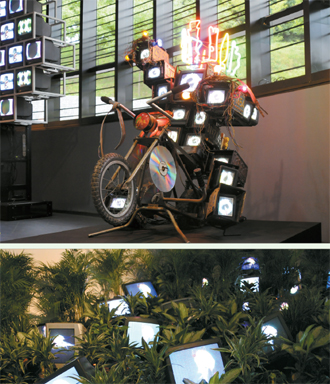 The exhibition “Nostalgia is an Extended Feedback,” starting today to celebrate the 80th birthday of Nam June Paik(1932-2006), focuses on his works related to cybernetics and those by artists influenced by him.

The title “is borrowed from the phrase that Paik himself used as a title for his essay written in 1992 and also for one of his artworks, alluding to the key concept of cybernetics, i.e. feedback,” according to the English homepage of Nam June Paik Art Center.

“Cybernetics - the theory of systems and information in a narrow sense and philosophy of life and knowledge connecting man, machine and nature in a wider sense - was a great source of inspiration for Paik.”

This can be seen in Robot K-456, a remote-controlled automaton that Paik made in collaboration with Japanese engineer Shuya Abe in 1964. It is one of the museum’s permanent exhibits.

Robot K-456 is called “the first non-human action artist” as it appeared in several Paik performances, including “Robot Opera.”

And “TV Garden,” an installation of cathode-ray tube TV monitors among thick plants, shows the artist’s visualization of nature’s energy waves into the images and sounds of television monitors, which also relates to the concept of feedback in cybernetics.

“TV Garden,” considered to be one of Paik’s iconic works, is also among the museum’s permanent exhibits and will be shown in this special exhibition together with another Paik installation, “One Candle.”

“Paik tried to incorporate the potential values of cybernetics, robotics and informatics for humans into art,” says Manu Park, director of Nam June Paik Art Center. “His unusual view of the world was not that man and nature would devastate each other due to scientific technology, but that man, machine and nature would be able to come together.”

And Paik’s videos and films - “Swiss Clock,” “Zen for Film” and “Paik-Abe Video Synthesizer” - in the exhibition show the cybernetic issues of spatio-temporal multiplication, noise-information dynamics and man-machine interactivity, the museum says.

The exhibition also includes the 1979 film “Ancient of Days” by Bill Viola, 61, who is regarded as one of the most important contemporary video artists. When he was in early 20s, the American artist worked as an assistant for Paik.

Among other artists in the exhibit are Danish-born Olafur Eliasson, whoi lives in Iceland , American Dan Graham and Lee Bul of Korea.

And as part of opening ceremony this afternoon, there will be performances by Japanese composer and violinist Takehisa Kosugi and Korean composer Hwang Byung-ki, who plays the gayageum, a traditional string instrument.

Along with Paik, Kosugi, 74, participated in the “Fluxus” movement in the 1960s and 70s. Meaning “To Flow” in Latin, the movement pursued the breaking down of borders between art genres and even between art and non-art.

Artists who joined the movement conducted various experiments in “anti-commercial aesthetics” under the leadership of George Maciunas. German artist Joseph Beuys and Japanese-American artist Yoko Ono, best known as the widow of John Lennon, also participated in the movement.

Hwang, 76, became friends with Paik in New York in 1968 and participated in the concert there that same year to raise money for cellist Charlotte Moorman’s legal expenses.

Moorman was arrested on charges of public indecency in 1967, while performing topless in “Opera Sextronique, ” which was planned by Paik and held in New York. Ultimately, she was convicted and given a suspended sentence.

There will be a screening of Paik’s major videos on the media facade of Seoul Square Building across the street from Seoul Station at 8:30, 9, 10 and 11 p.m. each Tuesday, Thursday and Saturday through Aug. 20.

*“Nostalgia is an Extended Feedback” runs through January 20. Admission is 4,000 won for adults. The museum is open 10 a.m. to 8 p.m. daily, except for the second and fourth Monday of every month. Take bus No. 5000 or 5005 from Seoul Station or Sejong Center in central Seoul and get off at Singal five-way intersection in Yongin, Gyeonggi.