The interest rate on 91-day CDs is used as a benchmark for credit loans, mortgages and bank derivatives.

According to sources, one of the financial institutions came clean when FTC investigators conducted an on-site investigation and collected documents and other data related to the banks’ CD rates this week.

FTC agents raided 10 securities firms on Tuesday and nine banks on Wednesday in relation to the case.

If confirmed, the financial institution in question, as the first whistle-blower to cooperate with the anti-trust authority on the issue, will see its prospective penalties completely erased under the FTC’s leniency program. The second firm to put its hand up voluntarily should have its fine slashed by 50 percent, according to the program.

The agency refused to confirm whether it has granted leniency to the company.

“The core role of the leniency program is to unearth crucial evidence to prove acts of collusion .?.?. and effectively reduce the strength of cartels,” said an official at the FTC, who asked not to be named. “The FTC cannot disclose the name of the firm, nor can it confirm what form of leniency was applied, in line with our work ethics and code of conduct. We expect the investigation could last for up a year.”

In 2007, the FTC fined local insurance companies a total of 50 billion won ($ 43.8 million) for fixing rates on car insurance policies after a major insurer confessed its involvement.

Recent news reports suggested that some banks may have colluded on CD rates given that their employees in charge of raising capital meet once a month and may exchange information on the rates. 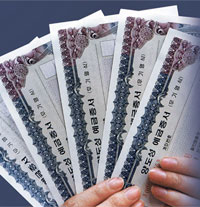 The Korea Federation of Banks yesterday released a statement denying its members’ involvement.

The Korea Financial Investment Association announces the key CD rate after calculating the average offered by eight local banks, based on an evaluation compiled by 10 securities firms.

Critics say the system provides brokerages with loopholes to manipulate the rates. 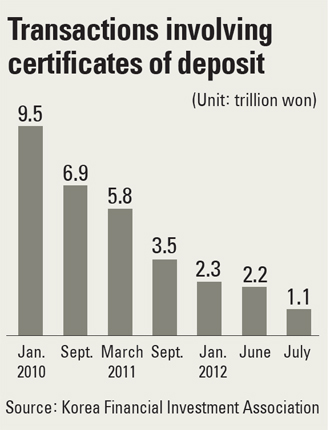 Suspicion that banks have been secretly working in concert to exploit the situation gained ground after the rate stayed at 3.54 percent for the sixth consecutive month last week, despite the Bank of Korea slashing its key interest rate by 0.25 percentage points.

To address the problem, officials at the Financial Services Commission met with their counterparts at the Financial Supervisory Service (FSS) and Ministry of Strategy and Finance to discuss whether they should mandate all banks to issue CD rates to root out rate-rigging.

The FSS seemed baffled at the latest development as it could be held responsible for the CD rate scandal based on presumptions of its lax supervision.

The controversy has already been dubbed “Korea’s Libor scandal,” in reference to the rigging of the London Interbank Offered Rate by Barclays Bank in Britain and the U.S. This resulted in the bank paying a $456 million fine to financial authorities in the two countries last month.

Last year, the FSS was peppered with criticism for being overly relaxed in its supervision of savings banks that were later suspended due to corrupt management by their executives.

“It’s too soon to determine the FSS’ responsibility,” said an official at the financial regulator.

Industry insiders point the finger at financial authorities, saying the CD rate debacle could have been acted on sooner.

“Financial authorities have been encouraging banks to determine the interest rates on loans and mortgages based on the cost of funds index (Cofix) rather than CD rates since 2010, so the volume of transactions using CD rates fell,” said an industry source at one local bank. “They knew that demand for CD rates was falling, so they could have chosen a new index earlier.”