The ugly duckling of sports cars is pretty lovable

The ugly duckling of sports cars is pretty lovable 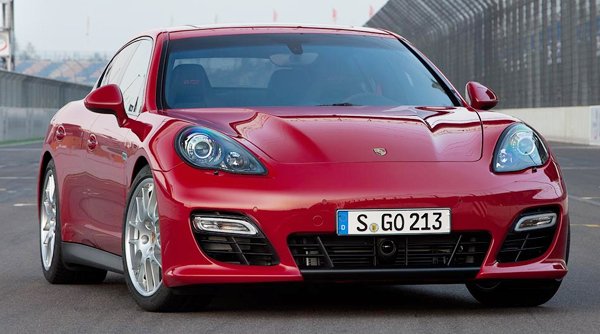 Porsche’s Panamera GTS sticks to the tarmac like Spider-man.


The new Panamera GTS is either the perfect marriage of a luxury sedan and a racing-tuned sports car, or a freak of nature, a 430-horsepower, kind-of-weird-looking, all-guns-blazing Usain Bolt of the automotive world. For me, the jury’s still out on this one.

It can out-sprint or keep pace with almost everything on the road, but it also comes with gangly legs and a goofy grin - or, in this case, four doors and a gargantuan trunk. Outside Porsche HQ, the design is hardly going to pop champagne corks. Even the boot has a button inside so it can be shut automatically, testament to its sheer bulk. 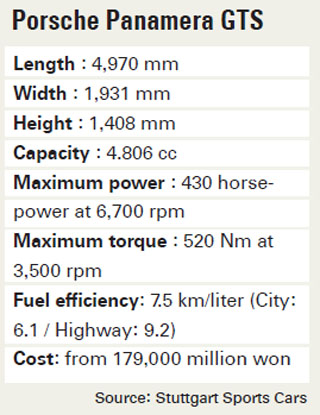 Purists will appreciate what’s bubbling under the hood, but for traditionalists, this is a supersized imposter, barely recognizable as a Porsche despite the half-century legacy of the Gran Turismo Sport brand, which dates back to the 904 Carerra GTS in 1963.

On the flip side, with its 4.8-liter, naturally-aspirated V8 engine and impressive range of adjustable, circuit-driving options, the GTS can be more fun to play with than Kazunori Yamauchi’s Gran Turismo video game.

The first Panamera, which went on sale globally in fall 2009, was a genre-straddling game changer that threw up a handful of spiffy technological innovations. But in trying to be a jack, and master, of all trades, the all-wheel-drive GTS, which was released here in March 2012, has set itself an impossible task, albeit one it aspires to valiantly.

So admire the red brake calipers, the four-way split rear spoiler that unfolds automatically at 205 km/h and the sonic boom of the exhaust, just accepting the fact that, compared to two-door 911s, Audi R8s or Gallardos, you’re driving the ugly duckling of sports cars.

Marvel at the svelte Alcantara trim on the seats, side armrests and rooflining, but wonder why Porsche plastered this all over the steering wheel when your hands get sweaty. Thrill at the manual override on the gear stick for that rally-driving rush, and ignore the fact that the chrome stick looks like the Terminator’s head with the flesh burnt off. For more of an F1 feeling, shift paddles prove a welcome addition to the steering wheel.

In fact, Porsche has crammed so much stuff into this baby to make it all about you that it’s kind of flattering. Such elaboration is symbolized by the fact that there are not one but two stretched center consoles. The one in front looks like it was lifted from an airplane cockpit and sits under a horseshoe-shaped roof light.

An active suspension management system lets you adjust the leveling - spring rate, damping system - on gas-filled shock absorbers via a spoke protruding from the steering wheel. Then there are the 18-way adjustable sports seats. In many respects, the GTS is amazing, and it sticks to the tarmac like Spider-man - well almost. I managed 0-100 in 8 seconds despite aquaplaning, whipsawing, braking and correcting after flooring it across a rain-swept parking lot (5.7 on my second attempt). An electronic stopwatch on the instrument cluster behind the wheel lets you time yourself. The same lever controls the audio system, which has decent speakers, but not in the same league as those in the new Mercedes SL.

But it’s the tailpipe acoustics that are a real joy, allowing you to strike the fear of God into the hearts of other motorists and pedestrians. A so-called Sound Symposer channels intake vibrations from between the throttle valve and air filter, then sends them down the A-pillar in the form of primordial growls and explosive reports emitted during quick downshifts.

It’s just the kind of showboating you’d expect from a gangly Jamaican sprinter, even one made in Germany.