Samsung and LG Electronics are rolling out gigantic 900-liter (238-gallon) refrigerators that both companies claim are the world’s largest, intensifying a battle of pride over technological capacity and market share in the home appliance industry. 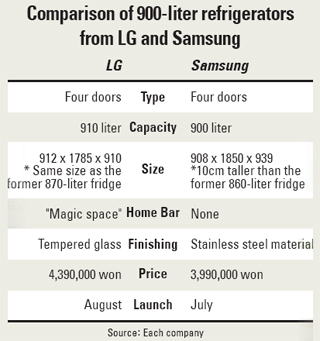 Refrigerators often serve as an indicator of a brand’s technological expertise and future sales.

The nation’s two electronics giants account for more than 90 percent of the domestic home appliance market and have been competing to launch the world’s largest refrigerator since 2010.

LG is scheduled to release a French-door-style, 910-liter refrigerator line called Dios, which incorporates a coldroom on the top and a freezer at the bottom.

Taking into consideration the limited space of most Korean kitchens, LG maintained the size of the refrigerator, while adding a “magic space” to enhance consumer convenience with more storage.

The magic space home bar inside the fridge is a kind of mini-fridge inside the refrigerator, attached to the entire upper-right door of the coldroom, which allows users to customize the storage space and maximize efficiency while lowering electricity costs, LG said.

The new fridge has a capacity that is 40 liters larger than the previous model, the equivalent of 26 1.5-liter plastic bottles, while maintaining the same width and height as the existing premium fridge.

Despite the higher capacity and the wider inner space, it implemented the minimum power consumption of 34.5 kilowatts by manufacturing it with ultra-efficient vacuum insulation.

LG’s announcement came about a week after Samsung’s release of the Zipel T9000, which the tech giant unveiled at a press conference early this month as “the world’s largest” with a capacity of 900 liters. TV star Lee Seung-gi was on hand to promote it. However, in just 10 days LG took the title of “world’s largest.” 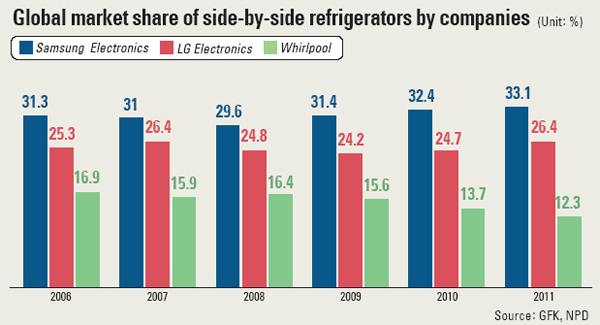 According to Samsung, sales have have been three times higher in the 10 days since the release than they were for the two-door Grande Style Series in October 2010.

“We are experiencing better-than-expected demand and the Kwangju factory is in full mode, focusing on the Zipel T9000,” said an employee at Samsung Electronics.

The four-door refrigerators are expected to boost sales for both manufacturers, making up for a slowdown in other home appliances.

Samsung and LG have been in neck-and-neck competition over “white goods” - refrigerators, washing machines, air conditioners and microwaves.

Every time Samsung launched a new product, LG countered with a similar or a slightly higher specification model.

“Traditionally, LG was showing an edge over Samsung in white goods, but in the past few years Samsung caught up with LG, rapidly narrowing the gap thanks to its brand power,” said an industry insider.

In the laptop market, Samsung accounted for 50 percent of the market last year compared to 19.4 percent for LG.


According to market research firm GFK, in the domestic, drum-type washing machine market last year, LG topped the list with a 48.4 percent of sales, 1.7 percent better than Samsung. But Samsung ranked first in price competitiveness at 48.2 percent, 0.5 percent ahead of LG.

“It remains to be seen whether the two prominent consumer electronics companies would further revolutionize their breed by exceeding current technology with smart features and information technology,” said a senior researcher at Samsung Economic Research Institute.

Although they currently dominate the domestic market and lead the world’s consumer electronics market, some experts voice concern that the two must be wary of China’s emerging multinational consumer electronics and home appliances company Haier, which has an edge over Samsung and LG in price competitiveness.

Haier already has the biggest share of the world’s appliances and electronic goods market, with revenues reaching 150.9 billion yuan ($23.7 billion) last year, giving it a 7.8 percent share of the global market. Of its sales, 70 percent were in Asia, where low prices are often the key selling point.