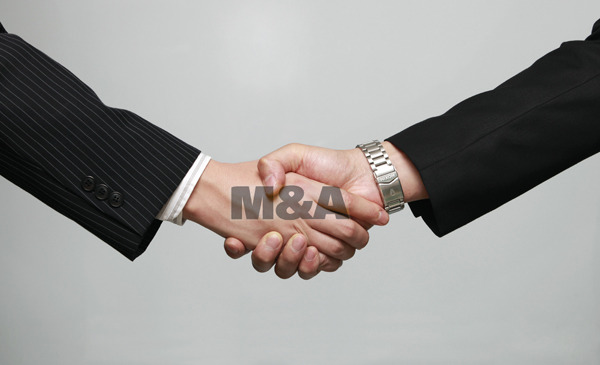 This is shaping up as a big year for Seoul’s deal makers, with preliminary procedures for bids for a number of mammoth M&A deals either having already been set in motion this month or due to start soon. Deals include those involving Woori Finance Holdings, Ssangyong Engineering & Construction and ING Life Korea.

The incumbent Lee Myung-bak administration and the ruling Saenuri Party agreed last week to give up their ambition to sell the government’s stake in Incheon International Airport and a new KTX line connecting Suseo in southern Seoul with Pyeongtaek, Gyeonggi.

This is a significant move given that ministers under Lee have openly said they can no longer delay M&A deals for the sake of the nation’s interest.

Whereas the privatization of public facilities will be handed over to Lee’s successor, the outlooks for private-sector M&A deals vary, industry insiders say.

With just five months left of Lee’s single five-year term, some critics say Lee’s successor must handle the sale of Woori Finance Holdings, which is worth many trillions of won, as the current administration is running out of time. 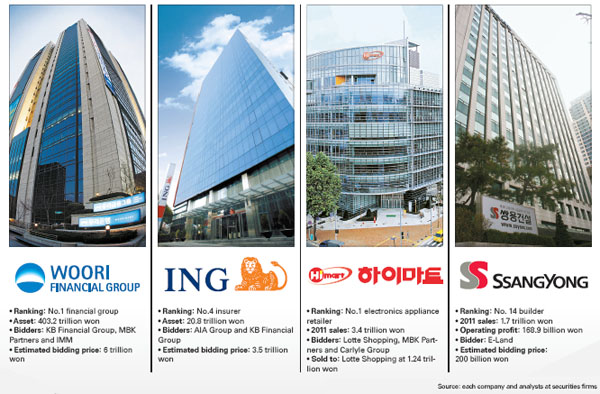 Insiders said the outlook for the sale of ING Life Korea looks bright as two strong players have thrown their hats in the ring.

The primary bidder is expected to be selected by early next month at the latest, according to industry sources.

Korea’s second-biggest banking group has been trying to expand its presence in the fast-growing insurance market.

According to analysts at securities firms, if KB Financial Group successfully takes over ING Life Korea, the former will be able make full use of its 1,160 local branches to handle ING Life’s nonbanking businesses, such as bancassurance.

“More than 90 percent of the group’s revenue is covered by its flagship KB Kookmin Bank and it wants to diversify its source of revenue to make ING a prime chance,” said Kim Jae-seung, an analyst at Shinyoung Securities. “KB Financial Group is pursuing M&A deals in insurance and securities firms in a bid to earn 30 percent of its entire revenue from the non-banking sector by next year. If it gets ING Life Korea for an appropriate price, it could achieve that goal.”

Industry sources said AIA Group, the multinational life insurer, is also believed to have submitted a bid for the company to secure a stronger foothold in the market, although AIA refused to confirm this.

If AIA Group successfully acquires ING Life Korea, it will become the fourth-biggest player in the local insurance market, jumping from 10th place.

But whether the ING Life Korea deal will meet its original deadline is up for debate as the labor union of ING Life Korea said last week that it will launch a strike for an indefinite period between tomorrow and coming Tuesday. This is because its management has not taken a sincere attitude toward guaranteeing job security or converting temporary contract workers to full-time regular workers during negotiations, it said.

“There has been no progress [in negotiations] because management has intentionally delayed the talks several times,” said union leader Lee Ki-cheol.

If the union puts its words into action and goes on strike, market watchers said such a move could delay the entire sale of ING Life Korea.

The ING deal remains an attractive option to investors because the company is in relatively good shape. It put its Asian insurance and asset management operations up for sale because it was ordered by the European Commission to sell its global insurance arm in return for the state aid it received during the 2008 financial crisis.

“KB Group can generate the best synergy effect from this deal,” said an employee at KB Group. “The labor union of ING Life Korea wants a domestic financial institution to take it over instead of a foreign firm.”

Although the Lee administration has hoped to divest its stake in Woori Finance Holdings, insiders say the road ahead is far from certain as the president may be running out of time.

According to sources at KB Financial Group, three private equity funds including MBK Partners and IMM were notified of the bid last Tuesday. The deadline for submitting a preliminary bid is this Friday.

KB Financial Group is also mulling joining the Woori deal. It will decide whether to participate in it on Friday morning by putting the matter to a vote at a 13-board member meeting. If the majority of KB’s 13 board members vote in support of the deal, it will go ahead with it, sources at KB say.

Euh of KB Financial Group said in a recent interview with the press that KB is capable of handling both bids as it has the capacity to borrow 5 trillion won.

“Paying in installments would be ideal,” Euh said. “When Shinhan Bank acquired Chohung Bank in 2004, it paid just 900 billion out of the 3.3 trillion won acquisition fee in cash. It paid the rest by offering redeemable preferred shares to the government, then made installment payments for two years.”

The government’s previous attempts to privatize Woori in October 2010, and again last year, failed due to a lack of willing buyers. Last August there was a single bid from private equity fund MBK Partners, which the government did not accept because a lack of competition failed to “maximize the recovery of public funds.”

The administration is trying to fulfill Lee’s 2007 election pledge to recover state funds by privatizing state-owned companies. In the wake of the 1997 Asian financial crisis, some 12.8 trillion won in government bailouts was spent to save banks, which were consolidated into Woori Financial Group in 2001. Of that, only 5.4 trillion won has been recovered so far.

“There’s no one apart from KB Financial Group that can acquire Woori, but whether it will participate in the bid will not be known until Friday,” said Kim In, an analyst at Eugene Securities.

Will Ssangyong Engineering & Construction be able to find a new owner this time after failing three times?

Established in 1977, Ssangyong went under a debt workout program in 1999 after failing to pay its mounting debts during the Asian financial crisis. It completed the program in 2004.

A 50.7 percent stake held by Korea Asset Management Corporation (KAMCO), the state-run debt-clearing house, is also likely to be put on sale for 200 billion won, according to analysts at local brokerages.

According to industry sources, E-Land was the only party interested in acquiring the builder in the second round of preliminary bidding. A German engineering company, M+W, which participated in three separate bids for the builder this year, did not participate this time.

E-Land, which is better known to local consumers as a fashion and restaurant retailer, has been expanding its business portfolio to include resorts and construction companies.

“E-Land has set up a long-term plan for leisure and theme parks, and acquiring Ssangyong could create a good synergy effect with the firm’s retail, leisure and overseas business,” said Lee Kyung-rok, an analyst at NH Investment & Securities.

Market watchers say Ssangyong could represent a once-in-a-lifetime deal for E-Land because of its wealth of experience in the construction sector.

It has carried out 130 construction projects in 20 countries since advancing into overseas markets, garnering more than $8.5 billion in revenue.

In 2010 it built Singapore’s Marina Bay Sands Hotel, the so-called “miracle of 21st-century construction,” surprising the world once more.

E-Land plans to list its Chinese affiliate, E-Land Fashion China Holdings, on the Hong Kong Stock Exchange. E-Land’s first IPO is expected to generate as much as $1 billion of fresh funds and it is expected to use the fund for the Ssangyong deal.

A source at a local investment bank said it may take about six months for E-Land Fashion China Holdings to debut on the Hong Kong Stock Exchange.

But whether E-Land will be able to snap up Ssangyong is unclear, as Kamco has the right to not choose a bidder for negotiations if it submits a low price.

The retailer purchased a 65.25 percent controlling stake for 1.24 trillion won that was previously owned by Hi-Mart Chairman and founder Sun Jong-koo, Eugene Group, and Hi consortium.

Through the deal, Hi-Mart expects to benefit from Lotte’s strong network and sales channels both at home and abroad, while Lotte aims to boost its relatively weak presence in the discounted electronics segment.

Lotte launched its own “digital parks” within its larger stores in 2009, with 12 such outlets currently in operation. It has been seeking options to expand the business to generate more revenue in the future.

Given that Hi-Mart was put on sale last December due to management disputes between its founder Sun and Eugene Group, Lotte aims to give considerable bonuses to Hi-Mart employees when it completes its M&A deals between September and October.

“This is aimed at effectively blocking any chances of disputes arising with Hi-Mart employees, not to mention raising employee’s loyalty,” said an industry source. “The tactic resembles how Samsung Group sold its maintenance, repair and operation subsidiary, iMarket Korea, to Interpark last year.”