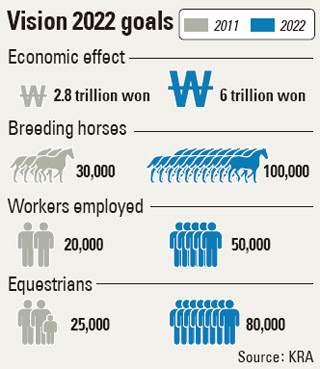 The Korea Racing Authority unveiled its “Vision 2022” for Korea’s horse industry on July 23. Horses are a growing part of the livestock market.

The first goal is to upgrade the horse racing. Korea’s horse racing rank is the lowest of third grade. The Korea Racing Authority promises to upgrade this rank to second within 10 years and to improve the profit from horse races to 1.3 trillion won ($1.1 billion) (currently 850 billion won). For this goal the KRA has chosen the Korea-Japan race card. This is to attract interest from the people. KRA will start the regular Korea-Japan race from next year and based on this experience it aims to host a world competition like the Melbourne Cup within the next ten years.

So-called “horse tech” investment will accelerate progress as well. Right now, the price of a horse is beyond comparison with other livestock. Normally a cow cost 4 million won but a horse is 40 million won. If the horse is from a prized breed, then the price just rises higher. Actually in March a young racing horse, 2 years old, was sold at 160 million won and his father was imported at 4 billion won. The KRA has decided to increase its horse export to 50 horses a year, which is only 6 horses a year through improvement of breed. Also until now, the horse price was too expensive for ordinary people to become horse owners but from next year, KRA will launch the citizen horse owner system, in which five to twenty people can form an organization to own a horse together and share the profit through racing.

KRA Chairman and CEO Chang Tae-pyong said, “We will increase the economic effect of the Korean horse industry to 6 trillion won by 2022. By raising 3 more horses, one additional job is created.”

The KRA is also working to improve its image through various horse riding programs and making theme parks with horse tracks. At the end of last month, a rehab and healing center using horses was opened in Incheon. One mother, who sent her Internet addicted son there, said, “While communicating with live animals, the child recovered emotional comfort.” CEO Chang said, “We will continue to open new outdoor tracks on the outskirts of the city in park style. In addition, we will try to earn 30 percent of the KRA’s total profit through horse-related industries other than horse racing.”