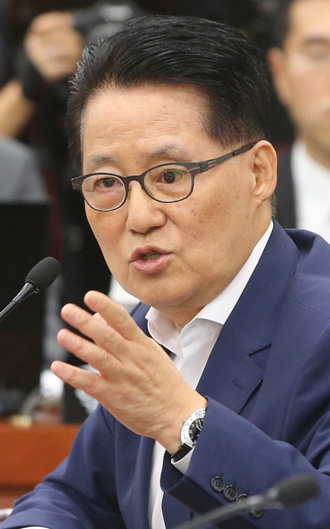 The prosecution has decided to seek a warrant to arrest Representative Park Jie-won, floor leader of the largest opposition Democratic United Party, after he refused to be questioned in a graft investigation, a prosecution source said yesterday.

That puts the opposition in the same boat as the ruling Saenuri Party earlier this month as to whether it will shield one of its own from arrest, using immunity provisions for lawmakers.

Saenuri Party representatives in the National Assembly voted to keep their fellow legislator Chung Doo-un from being arrested on similar bribery charges and suffered a major public backlash as a result.

Under the nation’s law governing the National Assembly, law enforcement authorities are required to obtain the legislature’s approval to arrest a lawmaker during a legislative session.

The current session ends Aug. 3, but the possibility has grown that the opposition party wants to continue to keep the Assembly session open to protect Park using the excuse of handling pending issues such as endorsing Supreme Court justice nominees - and that has also grown into a political issue.

On last Thursday and Monday this week, the joint investigation team of the Supreme Public Prosecutors’ Office on a savings bank scandal sent two subpoenas to Park to show up for questioning, but Park declined both requests saying the probe was politically motivated.

“Since Park made clear that he won’t cooperate, sending another subpoena is meaningless,” a prosecution source said, and it has decided to seek a warrant to take him into custody for questioning.

Park is accused of receiving bribes from Solomon Savings Bank and Bohae Mutual Savings Bank. The prosecution said it has testimony from the banks’ former executives.

But it remains to be seen if the legislature will allow Park’s arrest. And the Saenuri Party is now attacking the DUP for trying to keep the Assembly session open to protect its floor leader in the coming days.

Motions to confirm nominees for four vacancies on the Supreme Court were held up in the legislature for nearly 40 days as of yesterday after the DUP refused to arrange a voting session because it disapproved of one justice nominee. Four seats on the Supreme Court bench have been empty since July 10.

The latest chance to fill the vacancies came on Monday as the legislature had a voting session, but the motions were not introduced. The next voting session is scheduled to take place a week from today.

Speculation grew yesterday that National Assembly Speaker Kang Chang-hee will use his power to introduce the motions directly to the plenary session next Wednesday. The Saenuri Party already made a request to Kang to do so on Monday, but the speaker refused, saying that use of his authority should be a last resort.

The Saenuri Party yesterday repeated its determination to fill the vacancies at the top court as soon as possible. “We will continue our efforts to approve the motions before the end of the July session,” said Representative Kim Gi-hyeon, deputy floor leader of the Saenuri Party.

“Our lawmakers should refrain from going on overseas trips [in case the voting takes place].”

The Saenuri Party also criticized the DUP of using a political trick to save its floor leader from an arrest by keeping the legislature open at the expense of the judiciary’s operation.

“It really is an obsolete political practice for the DUP to allow the paralysis in the judiciary in order to have a bullet-proof National Assembly [for its floor leader],” Representative Lee Hahn-koo, Saenuri floor leader, said Monday.

The DUP said the argument was not worth responding to, but its leadership appeared to feel growing political burden.

According to DUP sources, some members of the Supreme Council of the DUP, when they had a meeting without Park on Friday, said the party needs to allow a recess in the legislature in order to give the prosecution a window to summon Park.

They reportedly proposed that a week of recess should be given after the current session ends on Aug. 3 and before the next session opens.

Park, DUP floor leader, said yesterday that he disagrees with the speaker’s plan to arrange the voting to confirm the Supreme Court justice nominees. “Kang must not use his power unreasonably,” Park said yesterday.