Preservation foundation arrives at a crossroads

Preservation foundation arrives at a crossroads

The hanok where Choi Sunu lived.

The drizzle has stopped and the sun is setting.

Choi Yoon-hee sits down and begins to play the prelude from J.S. Bach’s Cello Suite No. 1.

Fifteen people are gathered on the backyard balcony of the 80-year-old hanok (traditional house) of the late art historian Choi Sunu.

Choi and her audience share more than an appreciation of Bach under the stars. All are among the 450 members of the Cultural Heritage Foundation, National Trust of Korea, a nonprofit organization dedicated to the preservation of Korea’s cultural heritage.

And the concert is one of the ways the foundation is making use of it. Since 2004, the 395-square-meter (4,250-square-foot) house has been open to the public for concerts, lectures and exhibitions with occasional events exclusively for foundation members.

“Our goal with Choi Sunu’s house was not just preserving the structure, but the history of Seoul and the daily lives of the people of the time,” says Kim Hong-nam, head of the Trust of Korea.

Four years after buying the house, the foundation acquired another hanok in Dorae Village, Naju, South Jeolla, and the atelier of sculptor Kwon Jin-kyu.

But there have been no additional purchases since 2006.

Real estate prices in Seoul have skyrocketed and the foundation depends on membership fees that start at 10,000 won per month, as well as donations.

“It is mostly due to the financial burden, but that is not the only reason” said Choi Ho-jin, a manager at the foundation.

The organization’s focus has also shifted toward better utilization of already-purchased properties.

That got foundation officials thinking about how they could attract more people and raise awareness about the future value of preserving Korea’s past. Their conclusion? “We need content.”

So they began planning and presenting regular, diverse programs - concerts, lectures and exhibitions. 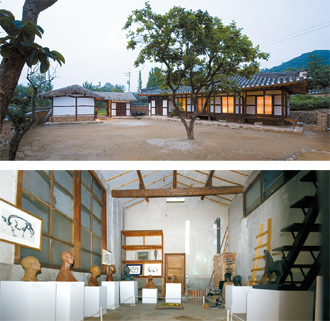 The hanok where Choi Sunu lived, a hanok in Dorae Village, Naju, South Jeolla (top), and the atelier of Kwon Kin-kyu (above) are the three properties owned and managed by the Cultural Heritage Foundation, National Trust of Korea. Provided by the foundation

While the house of Choi Sunu is a venue for cultural events, the hanok in Dorae Village is used for activities relating to rural life and the atelier of Kwon Jin-kyu for programs centered on art.

For example, organic vegtables are grown at the hanok in Dorae Village and distributed each month to members of the foundation who subscribe to the program. The vegetable distribution drew attention to the remote, less-visited property, says Choi.

Ironically, a steadily rising awareness of the value of preservation is another reason for the foundation’s shift away from additional acquisitions.

“City governments, district governments, civic groups and even individuals are all taking an interest in preservation,” Choi points out.

In early June, the Seoul Metropolitan Government announced a list of “1,000 Future Cultural Heritages” that should be protected.

The list includes homes of important figures in 20th century Korean culture and art as well as so-called “beehive towns” where laborers and their families lived in cramped spaces and hillside ghettos euphemistically called “moon neighborhoods.”

Both the beehive towns and ghettoes are threatened by development projects.

Such announcements trigger public interest in preservation and that leads to heightened competition.

In one case, the entrepreneurial owner of an old-style building in Incheon, west of Seoul, decided to preserve the structure on his own. He is transforming it into a restaurant for patjuk, or Korean style adzuki-bean gruel, and plans open for business next month.

Members of the Cultural Heritage Foundation, National Trust of Korea, are divided over the future course of the foundation.

Cellist Choi, who also belongs to a group of artists fighting a Korean conglomerate’s plan to develop Guleop Island in Incheon as a resort area, wishes the foundation would focus on both acquisition and utilization.

“The foundation doesn’t have enough resources at this moment to actively purchase old buildings,” she says. “I understand that. But once more people find out about the foundation and take part in its causes, the foundation will get bigger and stronger.” Choi has been a member for two years.

But others worry that too many acquisitions could result in pressure to increase income and turn peaceful old buildings into bustling tourist attractions or crowded commercial sites. They argue that it would be better to operate fewer properties in a well-managed, sophisticated manner.

“I recently went to folk villages and traditional ateliers on Jeju Island and I was saddened to see how they’ve become just places for selling cheap souvenirs and touting businesses to foreign tourists,” says an artist and foundation member who wants to be identified only as Ma.

But Choi says there is a third option: a permanent trust, in which the owner of a building retains ownership but allows organizations like the foundation to operate it for the public good. Permanent trusts are not common in Korea, but they are frequently used in other countries, he adds.

“Over the years, we’ve accumulated experience and know-how on running these facilities,” he says. “And if we want their preservation to be long-term and carry forward to future generations, it’s important to integrate them into their neighborhoods and make them a vital part of the community.”