Retail rivalry shapes up as tale of 2 CEOs

Retail rivalry shapes up as tale of 2 CEOs 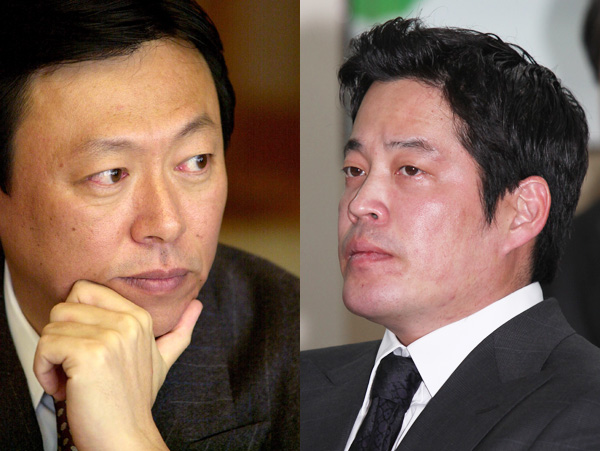 
The rivalry between the nation’s two largest retailers, Lotte Group Chairman Shin Dong-bin and Shinsegae Group Vice President Chung Yong-jin, over the expansion of their empire is sharpening as both are aggressively chasing M&As and ramping up their overseas marketing.

As the retreating economy cuts into their sales, the two figureheads have been seeking new profit sources. Most recently, Lotte and Shinsegae competed over the acquisition of Korea’s biggest electronic goods retailer, Hi-Mart.

The battle of nerves between Shin and Chung started when they took the reins of their respective retail giants in 2007. That year saw them both make expensive forays into the China market. Shin acquired eight discount stores of Netherlands-based retailer Macro there, and 65 stores of China-based supermarket Times, while Chung expanded the number of E-Mart stores in China to 10.

Industry observers say the bid for Hi-Mart was noteworthy as it threw light on the two men’s opposing managerial styles. Shin is known to have deep pockets and a propensity to spend on acquisition targets, while Chung is seen as more meticulous, careful and analytical.

Recently, Shinsegae has been stumbling and bowing out of acquisition bids, whereas Lotte has been going hell-for-leather to expand its business overseas.

Shin is also reported to be moving aggressively in creating new businesses, unlike Chung, who took nearly 10 years to examine the validity of Shinsegae’s outlet business.

However, Lotte’s interests overseas, including foreign supermarkets it acquired via M&As, are mostly struggling at the moment and posting operating losses.

The first Lotte Department Store in Beijing has been accused of having more sales clerks than customers due to it being shoddily planned and run.

Undeterred, Shin is believed to be looking to grow the number of outlets, earmarking locations in Tianjin, a massive industrial center close to Beijing, and Weihai, in eastern Shandong Province, as well as craving a new outlet in the Indonesian capital of Jakarta - all by this year.

Next year, it plans to open branches in Chengdu, southwest China, Shenyang, in northern Liaoning Province, and Hanoi.

It also plans to open 20 new Lotte Mart stores overseas this year and acquire local businesses along the way.

“Spontaneous M&As could pose a threat to the company’s financial health, and if Shin rushes into such deals, concerns about Lotte’s future prospects will inevitably grow,” said an industry insider.

In contrast, Chung is famous for exercising caution rather than throwing it to the wind.

During the Hi-Mart M&A, Chung, a man of few words, remained tight-lipped until after he had examined the feasibility of the business. He eventually decided to join the bid, but only on the day of the final deadline, while Shin publicly revealed his intention of acquiring the company much earlier.

Their different approaches are even more visible in China, where Chung insists on moving slowly but surely to get the job done properly.

Shinsegae sold off four foreign branches and six stores in the Chinese cities of Huangzhou, Ningbo, Taizhou and Changzhou to a Chinese corporation last year. Later, it sold two more stores in Shanghai.

“Striving for perfection is Chung’s management motto. But Shin shows greater impatience, possibly because of an ongoing succession struggle with his brother, Shin Dong-ju, vice president of Lotte Holdings,” an industry expert said.

While Lotte has the upper hand against rival Shinsegae in department stores as Lotte takes up 42 percent of the industry’s market share and Shinsegae trails with 20 percent, Shinsegae has the larger market share when it comes to discount stores. E-Mart has a 37-percent market share while Lotte Mart trails behind with 17 percent.