Ahn’s poll stats put him ahead of Park Geun-hye

Ahn’s poll stats put him ahead of Park Geun-hye 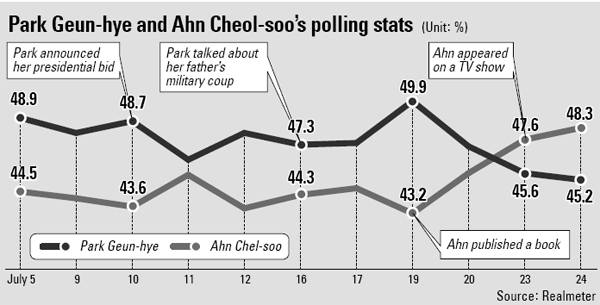 According to the Realmeter’s Tuesday survey, 48.3 percent of the polled said they would vote for Ahn in the December presidential election. Park came in at 45.2 percent. 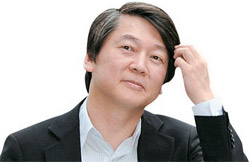 While Ahn had polled lower than Park until last week, his rise was evident this week. The approval rating of the software mogul-turned-scholar went up quickly over the past few days as he took a step closer to announcing his presidential bid. Last Thursday he published a book, “Ahn Cheol-soo’s Thoughts” which discussed politics and his vision for the country. On Monday, he made a rare appearance on a TV talk show.

The Realmeter poll asked 1,500 voters around the nation on Tuesday about their choice for president. The survey’s confidence level was 95 percent and the margin of error was plus or minus 2.5 percentage points.

According to the poll, voters are also increasingly supportive of Ahn in contests with more than two candidates. Park led the poll with 32 percent, while Ahn followed closely with 28.2 percent, up 4.5 percentage points from the previous day.

On July 18, before he published the book, Ahn recorded 18.1 percent, and he managed to boost his rating by more than 10 percentage points in one week. Ahn’s TV appearance clearly had an impact, said Lee Taek-soo, head of the Realmeter, in his analysis posted on Twitter. “It had a reinforcement effect so that people became more decisive on whether they like Ahn or not,” Lee said. “And it also had a significant effect in attracting undecided voters to him.”

“As Ahn led the poll two days in a row, the possibility grew that he will defeat Park in the weekly poll,” Lee said. “It remains to be seen if the tendency will hold. Ahn will likely keep his strength for the next one or two weeks, but there is a possibility that it will go down again as presidential primaries of the two major political parties heat up and the Olympic Games unfold. Ahn will likely decide when to announce his bid based on his rating.”

In his book and during the TV appearance, Ahn said he will “have to move forward if more people agree with his thoughts,” indicating that the amount of support will be an important factor for him in making a decision.

Park’s campaign officials played down the significance of Ahn’s rise in the recent polls, calling it a “temporary bubble.”

“During the course of examining a candidate’s qualifications, the support rate can go up or go down,” said Representative Lee Jung-hyun, a close associate of Park, yesterday in an interview with YTN radio. “We will just focus our attention on the people and walk our path steadily.”

Another Park loyalist, Representative Yoo Ki-june, also told PBC radio yesterday that the Park campaign is not alarmed by the situation. “It is natural for the public opinions to fluctuate whenever a political development takes place, whether big or small,” said Yoo.