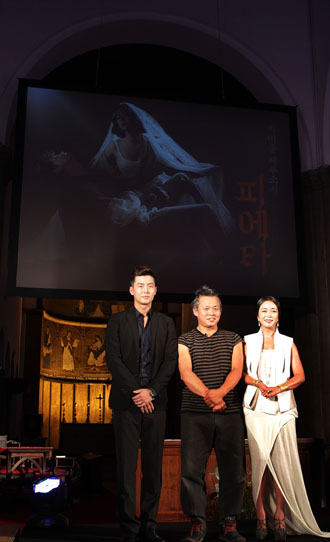 It was a memorable scene: Korea’s arthouse king Kim Ki-duk discussing his new film “Pieta,” which has already raised eyebrows for its interplay of sexuality and religion, in the sanctuary of the venerable Seoul Anglican Cathedral.

“Pieta,” which takes its name from Michelangelo’s sculpture and means mercy in Italian, is the director’s 18th work and first full-length feature film since “Dream” (2008).

The infamously media-shy Kim, who has received awards at the Berlin International and Venice film festivals, said that with “Pieta” he wanted to open up to the public more and “start living in a gentler manner.”

“Last year at the Cannes Film Festival, I spent my time avoiding Korean journalists and declining interviews but inside, my heart ached,” he said. 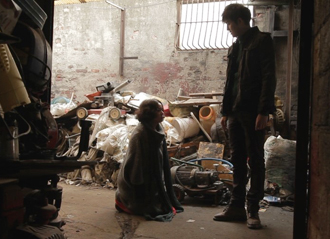 In the new Kim Ki-duk film “Pieta,” actor Lee Jung-jin plays a disturbed robber who meets a woman (Jo Min-su) who claims she is his mother. Provided by Hohohobeach

“Previously, I think I had quite stubborn tendencies, but now I try to tell myself not to objectify my opinions 100 percent.”

“Pieta” stars Jo Min-su and Lee Jung-jin, as a cold-hearted robber who works for loan sharks. The story develops as a Jo Min-su’s character appears, claiming she is his mother and apologizing for abandoning him.

The film includes strong Christian symbolism as well as highly sexual content. The Korea Media Rating Board gave it an over-19 rating.

On his risque mix of sexuality and religion in “Pieta,” Kim said he views “religion, love, politics, philosophy and science, all as elements of human existence” and he doesn’t limit himself to just one element in his films.

“Religion is so closely connected to humans and I think if anything, this element of existence should be expressed through love,” he said. “I think sex, in a way, is a prayer of sorts, so instead of dichotomizing the two [sexuality and religion] I think of the elements more as a singular chunk of our lives.”

Jo admitted that at first she was hesitant to work with the director.

“Whenever I watched his films, I felt uncomfortable,” she said.

“But when I met him, contrary to my preconceptions, he was very pleasant and so I decided to do the film after reading the script the next day.”

On his decision to cast Lee in the lead role, Kim said he felt the actor was “like a blank slate.”

“Jung-jin has been in many fun dramas, but I felt as though as an actor he was overlooked, like a blank slate that nobody was using,” said Kim. “His portrayal of the robber, being cruel on the outside but almost childlike and weak on the inside, was spot on.”

Lee, who has mostly starred in trendy TV dramas such as “Love Story in Harvard” (2004) and “I Love You, Don’t Cry” (2008), said he jumped at the opportunity to work with the renowned director.

On his role, Lee said, “Everyone who is born is loved by their parents and siblings and they live this chosen life, but this robber character has never been chosen by anyone in his thirty years.

“And then one day his supposed mother comes into the picture and he experiences a distorted form of growing pains that comes out of him in a strange, odd way.”

Regarding the title of the film, with a tagline that reads “Have mercy on us,” Kim said he chose it in hopes of seeing some mercy for human beings, including himself.

“Things like money and fame cause hostility in human relations and in a small-scale, this results in a fight with your neighbors while in a bigger scale, this can mean war,” he said.

“I think in a way, all of us living at present are beings that need to seek mercy before God.”

“Pieta” will be out in select theaters nationwide next month.