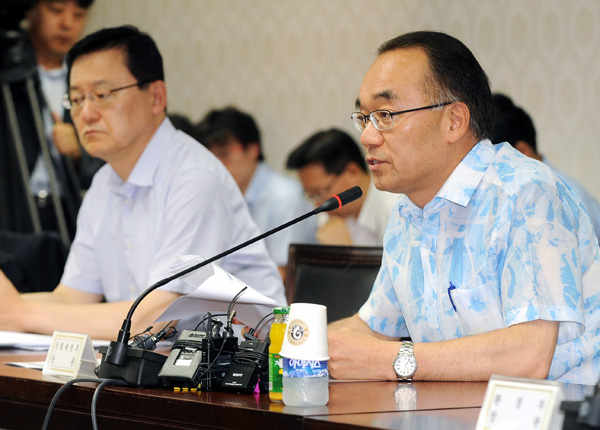 Data provided by the Bank of Korea showed that the latest quarterly movement was less than half that posted at the start of the year, when the economy climbed 0.9 percent from Q4 2011. 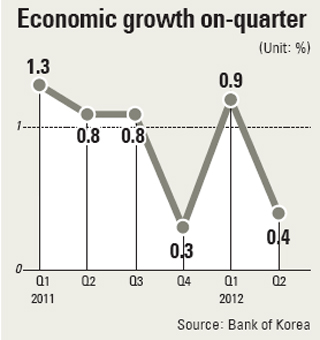 Due to the renewed malaise in the euro zone, the economy saw on-year growth of 2.4 percent in the second quarter, the slowest incline in almost three years.

The central bank said slowing domestic consumption and corporate investment in facilities and plants were the main reasons for the disappointing performance, as well as shrinking exports.

Consumer spending was almost consistent with the previous quarter as it inched up 0.5 percent on-quarter. But companies’ spending on new facilities and equipment dropped 6.4 percent, while exports fell 0.6 percent and imports shrank 1.7 percent.

The Q2 report came weeks after the central bank lowered its projection for this year’s economic growth from 3.5 percent to 3 percent. This is even lower than the Ministry of Strategy and Finance’s outlook, which was earlier revised down from 3.7 percent to 3.3 percent.

Market observers say that if the current trend continues, Korea could easily see its annual growth drop to within the 2-percent range.

In the first quarter, it expanded 2.8 percent on-year. The corresponding growth figure is expected to have hit 2.6 percent for the first six months compared to the same period last year.

This means it would require 3.3 percent growth in the latter half to meet the government’s target.

But as the fiscal crisis in the euro zone worsens, Korea’s heavily export-dependent economy may run out of steam before hitting the target of 3 percent growth for the year.

“For the economy to reach its target, the results for the second quarter should have been better,” said Bae Sang-geun, a senior member of the Federation of Korean Industries. “It will be difficult to achieve 3-percent growth this year as there is no engine of sufficient power that can haul the economy to that level.”

Some even hinted that Korea may enter an extensive period of flat economic growth, similar to the situation that undermined the Japanese economy in the past, unless fundamental solutions are found to Europe’s woes.

So far, all indicators point to a rocky road ahead in the second half. China’s economic growth fell below 8 percent in Q2 for the first time in three years. Even though the International Monetary Fund (IMF) still believes China has the potential to grow 8 percent this year, it warned that the possibility of a hard landing remains a real threat.

Even the situation in the U.S. is far from rosy. The U.S. Federal Reserve was confident until April that its domestic economy would grow 2.9 percent. However, it lowered its forecast to 2.4 percent last month. The IMF took an even less forgiving look at economic realities and lowered its estimate from 2.1 percent to 2 percent.

In the face of adversity, the central bank remained optimistic.

“The difference from the fourth quarter of last year [which saw quarterly growth of 0.3 percent] is that, during that quarter, consumer spending fell, but in Q2 it went up, which we see as a small but positive signal,” said Kim Young-bae, the BOK’s director general on economic statistics.

“Since the fourth quarter, it seems that the world economy, as well as our own, has been heading down an unpaved road,” Kim said. “In Q4 2011 we fell into the largest puddle, but then there was another puddle, which was the Spain crisis, in Q2 of this year.

He said the latest “puddle” was shallower and therefore easier to negotiate than that one dealt with at the end of last year.

“There will be puddles to come, but the situation is expected to improve in the second half as people adapt,” he said.

Barclay Capital projected in a report that the Korean economy is likely to recover in the second half after bottoming out in Q2.

Goldman Sachs expressed a similar view, adding that actions by the government to stimulate the economy and improve the performance of exporters would help the economy get back on its feet.