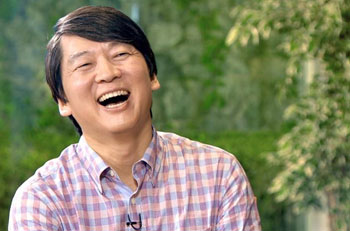 After liberal independent Ahn Cheol-soo strode more openly onto the public stage by releasing a book of his thoughts and appearing on a popular talk show, his opinion poll numbers rose.

So too did the number of public jabs from his rivals especially among conservatives. And some like-minded liberals directed some criticism at him and his political plans as well.

Both the ruling and opposition parties are now throwing nonstop political jabs at Ahn.

In the National Assembly’s Education, Science and Technology Committee on Wednesday, Saenuri Representative Kang Eun-hee raised the issue of school textbooks that say nice things about Ahn. “Eleven textbooks have mentions of Ahn,” she said. “It is inappropriate because he is at the center of current political attention.”

Ahn’s career success is described in 11 local textbooks including state-published elementary school texts. He is described in one as “a doctor who developed computer virus vaccines that are vital for Korea.”

“When they were approved in 2009 and 2010, Ahn was not a politician,” an official for the Education Ministry responded. “If Ahn formally declares a bid, we need to discuss whether we will keep him in next year’s textbooks.”

“Someone who is very much talked about these days says the two Koreas should create a space for dialogue and institute a ‘peaceful regime’ in order to remove the justification for the North’s reliance on its nuclear weapons programs,” Kim said. “How do you see this position of establishing a ‘peaceful regime’ before winding down the North’s nuclear programs?”

Minister Yu said, “That’s what Pyongyang argued in the past.”

The lawmaker and minister didn’t mention Ahn by name. Another Saenuri lawmaker close to candidate Park attacked Ahn in an interview with CBS radio yesterday. Representative Kim Jae-won labeled Ahn, “an opportunist with a face of a little prince.”

She said: “He seems to have a plan to consolidate his candidacy with that of a DUP presidential candidate,” Kim said. “That’s a trick: To make a contest with an exhausted candidate near the finish line.”

The DUP’s own heavyweights have raised hackles over Ahn’s stealthy rise to political fame, questioning why he won’t say whether he’s running for president or not.

Former South Gyeongsang Governor Kim Du-kwan, a presidential contender of the DUP, said Wednesday the time has come for Ahn to announce his bid. “Remaining mystic is not the right attitude before the public,” he said.