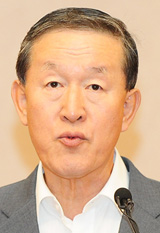 Chairman Huh Chang-soo of the Federation of Korean Industries said there is no need to respond to populist calls for “economic democratization” by politicians.

“I see no need to respond to every single populist remark of politicians who are eager to get votes in the presidential election in December,” Huh said at a press conference in Jeju Thursday evening.

It was the first time the head of the largest business lobbying organization commented on the concept that has become a popular rallying call for politicians on both sides of the ideological divide.

“It is a vague idea, but the definition of the clause in the Constitution is enough,” he said.

The Korea constitution defines economic democratization as “the achievement of harmony among economic parties” through “balanced economic growth, stabilization and an adequate distribution of incomes.”

It adds that this can be helped by preventing “abuses of economic dominance and power,” which may require “imposition of restrictions and adjustments on the market.”

The controversy over the definition and validity of the catch-phrase, and policies related to it, is almost guaranteed to continue through the December presidential election. Ruling party members and politicians in the opposition camp have become embroiled in an escalating war of words concerning what economic direction the next administration should take.

While some call for pro-chaebol economic policies by the next government to support growth, others demand radical reform of the conglomerates. Reformers want to put restrictions on large businesses, including sentencing chaebol family members to three years in jail if they are found guilty of embezzlement, and banning transactions among subsidiaries of a group.

Huh’s remarks came directly after former FKI Chairman Kang Shin-ho said the prestige of the FKI has hit bottom because Huh refused to join the debate.

Huh expressed regrets about conglomerates being viewed negatively by the public.

“It is unfortunate that wrongdoing committed by some companies have damaged the overall image of all business entities in the country,” Huh said.

“We need a new president who can encourage businesses to make profits, pay more taxes and contribute to maximizing the people’s happiness.”