Subgroup vows to split from UPP

Subgroup vows to split from UPP 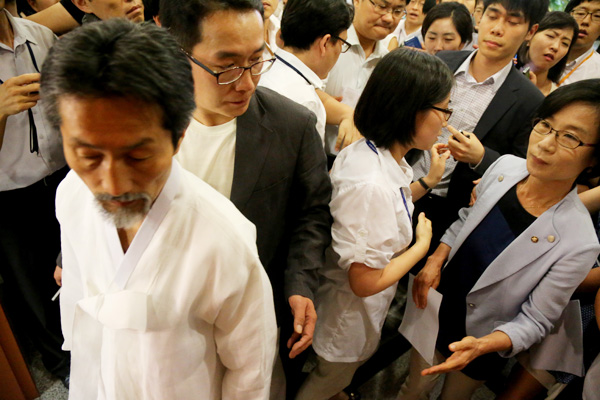 Kang Ki-kab, left, chairman of the minor Unified Progressive Party, walks to the podium to speak to reporters at the press conference yesterday in the National Assembly as Kim Jae-nam, right, a UPP lawmaker, offers her hand. [YONHAP]


A day after the minor opposition Unified Progressive Party failed to expel two pro-Pyongyang lawmakers, Lee Seok-gi and Kim Jae-yeon, who were elected in a rigged primary earlier this year, a growing number of its members vowed to leave the embattled party yesterday.

“Everyone [in the party’s non-mainstream faction] is currently flustered by the unexpected vote result,” said Roh Hoe-chan, a representative of the UPP’s smaller faction.

“There was one lawmaker [Kim Jae-nam] who said that she would vote the same way we did if we postpone the expulsion motion until after the central committee meeting on July 25, but the results ended up this way.”

Representative Kim, who is considered to be of neutral disposition, is known to have turned in an invalid vote - voting neither in favor nor against the motion.

On Thursday, at a party meeting, seven of the party’s 13 incumbent lawmakers cast votes and six were in favor of the expulsions while another ballot was turned in blank.

Five lawmakers abstained, mainly those loyal to the previous party leadership, while one lawmaker couldn’t vote because he was busy with personal matters, the party said.

A majority of seven votes were required for the motion’s approval.

The party’s failure to kick out Lee and Kim has thrown the UPP into deepening turmoil as it underlines the influence of the party’s pro-North Korea faction, which has been the subject of a fierce fight with reformist members over control of the party.

Yesterday, party members threatened to leave the UPP in protest of the disappointing voting result, saying that they see no future in the party.

Of the estimated 56,000 party members as of June, 1,150 expressed their intention to leave the party.

“The only path that remains now is to defect,” a party member wrote on a Web site message board yesterday.

“In the short term, this path may seem rough to take. But it may be the only way forward in the long term for a political cause and to win public support.”

Another member wrote, “I had waited for a long time with a sliver of hope that the matter will be resolved, but now I decided to leave without any regrets.”

Immediately after the vote on Thursday, the party’s leadership, headed by the newly elected reformist chairman Kang Ki-kab, offered to resign.

“Liberal politics has lost its way,” Kang said yesterday at a press conference. “We have again disappointed the people and party members who have hoped for the party to look back [on past faults of the primary rigging in March].”

“Members are leaving because of the disappointment that three months of reform efforts amounted to nothing,” an official of the reformist faction said.