Team Korea off to shaky start in London Olympics

Team Korea off to shaky start in London Olympics 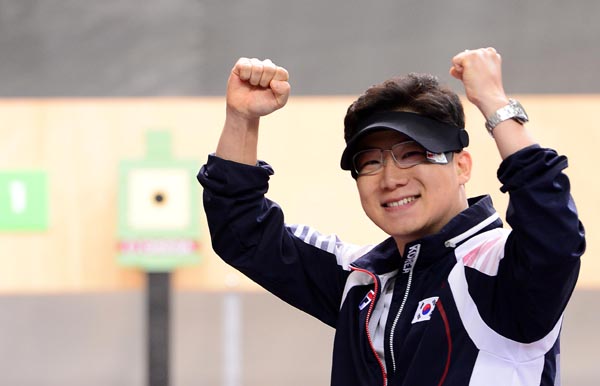 Jin Jong-oh pumps his fists after his winning a gold medal in the men’s 10-meter air pistol event at the London Olympics on Saturday.


Korea failed to win gold medals in several events it considered sure bets for the so-called “10-10” goal - 10 gold medals and a top 10 finish in gold medal count - but still kept its name on the leaderboard with three medals as the first weekend competition of the London Olympics headed to a close.

Jin Jong-oh earned the country’s first gold medal in the men’s 10-meter air pistol event Saturday afternoon, which ended up being the only gold thus far for Team Korea that hoped to get off to a comfortable start with as many as five gold medals in the first two days of the 17-day stretch.

Kim Jang-mi, another gold medal hopeful shooter for Korea, did not make it to the finals in women’s 10-meter air pistol, finishing in 13th at the preliminaries yesterday.
Park Tae-hwan, the defending champion in men’s 400-meter freestyle, settled for a silver medal with a loss to his archrival Sun Yang of China after the rivalry was salvaged by the reversal of a decision to disqualify Park for a false start.

Park qualified for the semifinals in the 200-meter freestyle yesterday. His time was fifth best at 1:46.79.

The greatest surprise for Korea on the first day came from the men’s archery team, one of Korea’s strongest sports programs whose bid for a third straight Olympic win in team competition was ambushed by the U.S. in the semifinals 224-219.

“We feel sorry for not being able to build on the model set by our seniors,” Oh Jin-hyek, the captain of the team, told reporters, after beating Mexico 224-219 in the third-place decider.

With one gold, one silver and one bronze, Korea was sitting tied with Brazil for fourth in overall medal standing, next to China, Italy and the U.S. as of 8 p.m. yesterday.

For shooter Jin, it was his third bid, and the first successful one, to win the 10-meter air pistol competition on the Olympic stage. The 32-year-old kept his calm in the face of a late rally by Luca Tesconi of Italy to score 100.2 in 10 shots in the eight-men finals held at the Royal Artillery Barracks. Overall, he scored 688.2, which was 1.3 ahead of the Italian policeman. Andrija Zlatic of Serbia took the bronze with 685.2. Pang Wei of China, the defending champion, finished fourth.

Before the final round, Tesconi trailed Jin by 1.3 points after Jin failed to reach the 10-point mark four straight times.

Showing little sign of the jitters, Jin scored a near-perfect 10.8 in the 10th shot to seal the victory.

Jin said that even though he was a little nervous he enjoys competing so much that he overcame his nerves. “I think I got a good result because I love this sport of shooting,” Jin told reporters after winning the gold.

It was Jin’s second Olympic gold medal and fourth Olympic medal. The silver medalist in the 10-meter air pistol at Beijing won a gold medal at Beijing in the 50-meter pistol, which he will try to defend on next Sunday. He won a silver medal in the event at Athens and has become the second Korean to win a medal in three straight Olympics, after wrestler Park Jang-soon, who earned one gold and two silvers in total at the 1988 Seoul Games, the 1992 Barcelona Games and 1996 Atlanta Games.

Nam Hyun-hee, a silver medalist in women’s foil at Beijing, had to settle for fourth place after the 31-year-old squandered leads in both the semifinals and third-place decider. Italy swept gold, silver and bronze in the event.

The pursuit for gold in badminton went smoothly as the men’s pair of Lee Yong-dae and Chung Jae-sung beat Howard Bach and Tony Gunawan of the U.S. 2-0 (21 to 14, 21 to 19) in the first group match.

Korea’s women’s handball team, which aims for a third straight Olympic medal, won its first group B match. The team beat Spain 31-27 at the Copper Box venue in London, Saturday. Women’s volleyball lost its first Group B match to the United States, a gold medal favorite, 3-1.

Gymnast Yang Hak-seon, the world’s reigning champion in men’s vault who aims to win Korea’s first Olympic gold in gymnastics, advanced into the final, scheduled for Aug. 6, with the highest points in the group competition held at North Greenwich Arena in London, on Saturday morning.