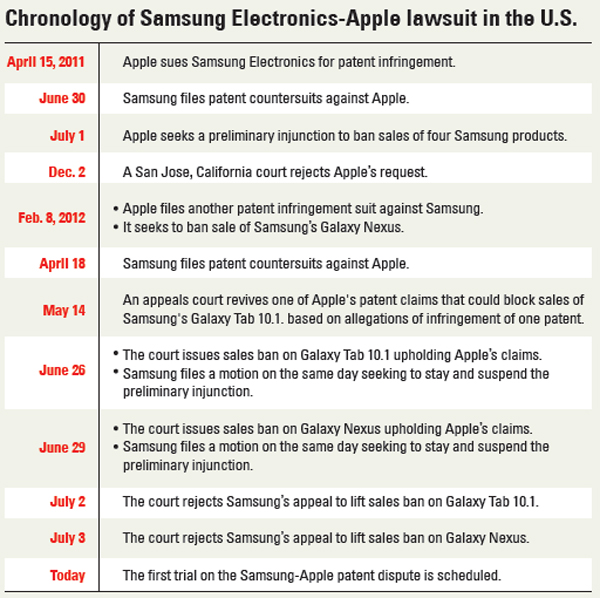 Apple and Samsung Electronics, having waged their patent battle on four continents, are now on a collision course in California with little prospect of a settlement before a jury trial set to begin today.

U.S. District Judge Lucy Koh in San Jose, who practiced as an intellectual-property litigator in Silicon Valley for eight years, is scheduled to start jury selection today. Jurors will decide each company’s claims that its rival infringed patents covering designs and technology for mobile devices, with potential damage awards reaching billions of dollars.

The companies have sued each other in the U.K., Australia and Korea, among other countries, in a bid for dominance of a mobile-device market that Bloomberg Industries said was $312 billion last year. In San Jose, Apple seeks damages of $2.5 billion based on claims Samsung copied the iPhone and iPad. The Cupertino, California-based company also wants to make permanent a preliminary ban it won on U.S. sales of a Samsung tablet computer, and extend the ban to Samsung smartphones.

“Eventually all the parties to the smartphone wars will have to settle,” Mark Lemley, a Stanford Law School professor, said in an e-mail. “But the parties have fought this one long and hard, and I don’t see why they would settle now, with an injunction already in place. I expect them to take their chances at trial.”

Claiming Apple is infringing two patents covering mobile technology standards and three utility patents, Samsung is demanding royalties of as much as 2.4 percent for each device sold.

Samsung said in a court filing, it plans to show jurors evidence that in 2006, before Apple’s January 2007 introduction of the iPhone, Samsung was developing the next generation of mobile phones, envisioning “a simple, rounded rectangular body dominated by a display screen with a single physical button on the face.”

Apple is trying to deflect Samsung’s infringement claims in part by arguing that Samsung deceived the European Telecommunications Standards Institute, according to a court filing. Samsung was pushing the organization to adopt certain standards without disclosing that it had applied for patents covering the same technology, Apple claims.

Kristin Huguet, an Apple spokeswoman, declined to comment on the trial or the possibility of a settlement.

Nam Ki-yung, a Seoul-based spokesman for Samsung, said in an e-mail, “We will take all available measures to stop Apple’s unacceptable free-riding of our intellectual property.” Bloomberg