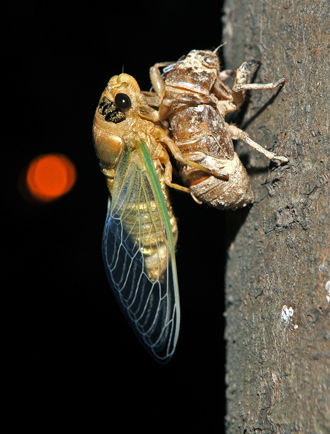 A cicada sheds its shell. By Kim Seong-tae

Kim Jung-geun, 45, from Yangcheon District in southwest Seoul, has been having trouble sleeping - and the high temperatures aren’t the only thing keeping him up.

“It’s not just the heat wave that has weakened my strength drastically, but also the noise of cicadas.”

According to the National Institute of Environment Research on Wednesday, depending on the type and number of cicadas, the average sound can range between 62 to 82 decibels. It exceeds the environmental quality standard of noise when it hits 65 decibels.

The sound can even reach over 100 decibels. Dr. Kang Dae-jun of the National Institute of Environment Research said, “A sound of 100 decibels is equal to the sound of a train passing.”

Artificial lighting and the heat from tropical nights lead to their singing at night until early in the morning.

Kim Tae-woo, the researcher from the National Institute of Biological Resources said, “Seeing that the cicadas’ chirping occurs more in tropical regions, it can indicate they are sensitive to temperature.”

Jang Yi-gun, a professor of environmental science at Ewha Womans University said, “Cicadas that make sounds at five in the morning around the time of sunrise are mostly robust cicadas [which are grey and more translucent], avoiding the time when Korean ‘horse’ cicadas are chirping.”

Horse cicadas are large and black and the biggest type in Korea. They enjoy high temperatures and are noisiest during the day.

Professor Jang added, “Global warming and the urban heat island phenomenon, a central area where the temperature is significantly higher than the surrounding rural areas, seem to be causing the number of horse cicadas to increase in southern Seoul and Gwacheon in Gyeonggi.”

The expansion of streets with cicadas’ favorite sycamore trees and zelkova trees led to the increase of horse cicadas over the past 20 years.

There are numerous ways to exterminate cicadas. In America, people use pesticides to prevent cicadas from damaging a garden, but it is unsustainable to use pesticides in residential areas downtown. Also, rain counteracts the effect of pesticides.

The researcher Kim suggested, “Wrapping a tree with aluminum foil is another way to keep them from reproducing.” Also, “it might be helpful to swap the trees on the streets to ones that cicadas dislike or adjust artificial lighting.”