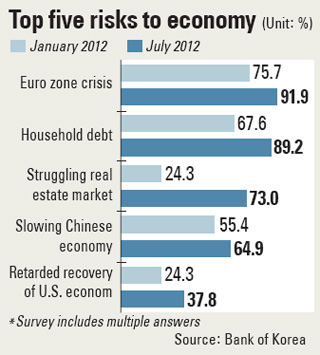 Korean financial firms see growing household debt and the tepid property market as the most serious risks to the local financial system in the midterm, the central bank said yesterday.

The deepening euro zone debt crisis topped the list of five core systemic risks with 91.9 percent, followed by household debt problems with 89.2 percent and the sluggish property market with 73 percent, the Bank of Korea said in a survey of systemic risks to Korea’s financial system.

Systemic risk refers to risk that could have a grave impact on the economy by spurring the whole or partial malfunctioning of the financial system.

The survey showed that although the euro zone debt risk was picked as the risk having the highest possibility of developing, Korea has enough capacity to cope with such risks due to its growing foreign reserves.

But household debt problems and the slumping property market are widely viewed as having the most far-reaching influences on the financial system, it added.

The survey was conducted on 74 officials from banks and non-banking institutions’ risk management as well as market players between July 5-11.

The data came as the country is grappling with growing household debt, which stood at 911.4 trillion won ($807.9 billion) as of the end of March.

The slumping property market undercuts the value of collateral, raising the number of households under pressure to repay mortgages.

Non-bank financial institutions viewed household debt problems as a more serious systemic risk than local banks on concerns that their loan exposures to borrowers may turn sour, according to the BOK.