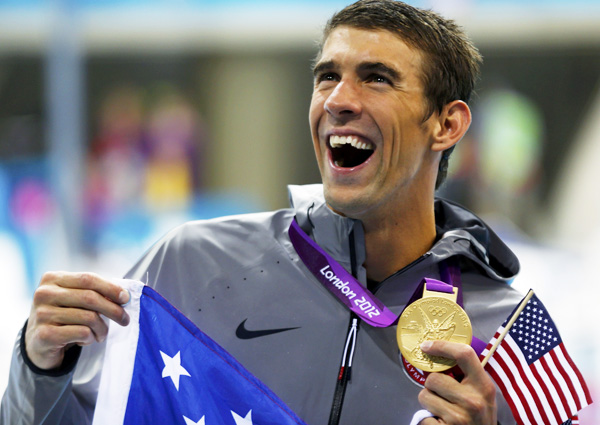 Michael Phelps of the U.S. holds his 19th Olympic medal presented to him in the men’s 4x200-meter freestyle relay victory ceremony during the London 2012 Olympic Games at the Aquatics Centre, Tuesday. [REUTERS/YONHAP]


Michael Phelps won the right to call himself the greatest Olympian of all time when the U.S. team destroyed the field in the 4x200-meter freestyle relay on Tuesday to hand him his 19th medal.

Chinese prodigy Ye Shiwen won her second gold of the Games, setting an Olympic record in the 200-meter individual medley, after stunning swimming pundits with her victory and world record in the 400 medley on Saturday.

But the night belonged to Phelps, who swam the anchor leg of a relay that the Americans dominated from start to finish after Ryan Lochte handed them a commanding lead. 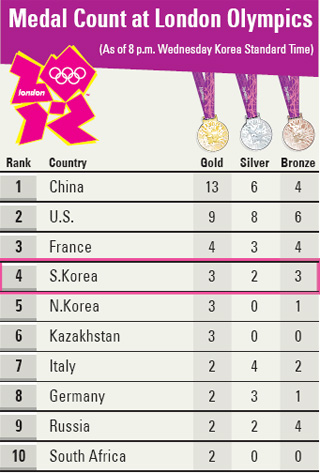 It was a historic moment in the 116-year annals of the modern Olympic Games, and an emotional one for Phelps, still a powerful force but no longer the commanding figure who won an unprecedented eight golds at the Beijing Games in 2008.

His teammates flung their arms around him. “I thank those guys for helping me get to this moment,” said the 27-year-old from Baltimore, who had 16 medals before the start of the 2012 Summer Games.

Having picked up a silver in Sunday’s 4x100 freestyle relay, he drew level with Soviet gymnast Larisa Latynina’s tally of 18 when he won silver in his first outing of Tuesday night, in the 200-meter butterfly.

The American led going into the last few meters of his favorite race, but was tiring rapidly and had to settle for second when South Africa’s Chad Le Clos ploughed through to snatch it on the final touch.

Latynina told Reuters earlier this month she had no doubt Phelps would overtake her in London, adding: “I can only wish him well.”

In other action on Day Four, Germany won its first two golds in equestrian eventing, and France its fourth in canoe slalom, but host nation Britain was still seeking its first.

China tops the overall medals table with 13 golds, followed by the United States with nine. Each has 23 medals in all.

The U.S. women’s team stormed to the gymnastics gold - the country’s first since 1996 - with dazzling performances from Jordyn Wieber and Gabby Douglas. It was compensation for Wieber’s disappointment at missing out on a spot in the all-around individual final.